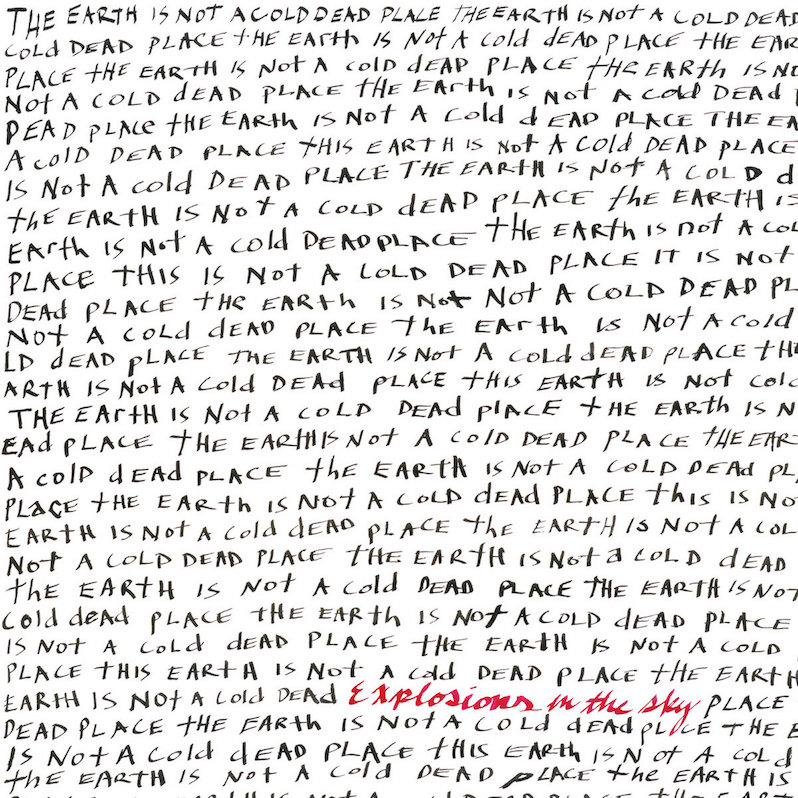 Almost all Explosions in the Sky fans will happily regale you with the bizarre conspiracy of coincidence that put the name into more households than it probably should have. How the post-rock outfit were inadvertently involved with the September 11 terrorist attacks of 2001 simply by releasing an album. The album in question was their sophomore, Those Who Tell the Truth Shall Die, Those Who Tell the Truth Shall Live Forever; a record released just a week prior to the attacks comprising six tracks of dark, despondent and, dare I say, apocalyptic music. The haunting album art was all angels, aviation and war, and the words “this plane will crash tomorrow” were printed in the liner notes. Such a chance occurrence from a band with a name like Explosions in the Sky will, in fairness, naturally earn itself a small amount of media notoriety under the circumstances. So while it was ultimately mountain out of coincidental molehill stuff to be sure, it did in a way ignite the gathering momentum the band had been enjoying—especially when it became clear the music itself was the far more interesting story.

It’s a story that, though small and anecdotal, also reflects the fear that crept into the world following those events. Two short years later and November of 2003 was an uncertain time to be alive. The aspirational wonder the new millennium invited had been immediately marred by conflict and chaos. While the initial impact of the September 11 attacks had slowly dissipated, life had nonetheless changed forever. The ripples were being felt around the world as the powerful had responded, leveraging and wielding that power in unruly ways. The ‘War on Terror’ had spread—breeding far more than it ever defeated—and we were asked to believe that our enemies were everywhere and anywhere. Borders became unyielding just as millions needed open arms, Orwell’s surveillance dystopia became reality and the future of a shared global humanity felt far from secure, despite what our leaders would have us believe. It was into this world that Explosions in the Sky released their anticipated third album.

I was 18 years old when I first heard The Earth is Not A Cold Dead Place. The insecurity of mandated adulthood and a newly available world was only amplified by the uncertainty that world seemed to feel at the time, even if my freshly post-pubescent brain couldn’t quite grasp the implications of that. Suddenly, here was music that allowed for that. Not in the way we thought the teen-angst rage music of high school did, but rather with warmth, subtlety and sincerity. It was a tonic of validation that invited you to recognize the tremendous pain that inhabited the world, but to always understand that was just one side of the equation. That tremendous beauty exists also, that both necessitate the other and all should be approached with the utmost humility. You felt you could ride its guitar lines into the expanse of chaos knowing it was OK to feel alone and afraid because everyone does, which is precisely why we’re not. Put simply, it brought welcome catharsis. Now we find ourselves in a time all too reflective of the Earth that birthed that album. The sensation of rudderless drift that beset a fearful 18-year-old is seeping back in and I’ve found myself returning to this wonderful record, grateful to find the place of refuge it built those years ago still very much intact.

The true beauty of The Earth is Not A Cold Dead Place lies in the delicate mood shift away from what the band had done previously, and indeed many in the genre had. Where clean and melodic layered guitar lines had always featured heavily as a staple of post-rock, they were broadly utilized as scaffolding for the immense builds and payoffs that would follow or punctuate. Here, though, Explosions in the Sky largely resisted the urge to hit the overdrive pedals; instead turning the dial on those stacked delays and cavernous reverbs and allowing the beauty of their melodies to dance among one another, flitting and shimmering in gentle ebbs and flows. The rhythm section equally holds itself back to soft textures and marching snares, inviting the music to softly inflate outward rather than surge and burst. While the guitars do explode from time to time—as seems to be a contractual obligation for a licensed post-rock band—on the whole it’s a record that avoids the melodrama, instead tender and restrained and unashamedly pretty.

Moreover, it’s eminently listenable. In a mainstream music culture where a hook and a chorus to sing along to is everything, here was an album that saw the instrumental genres no longer relegated to a niche of listeners who are “into that kind of stuff.” Fans of Mogwai and Sigur Rós, even Tortoise, might raise an eyebrow or two at that; while a quick trawl of any post-rock oriented social media group will usually find a vocal band of gatekeepers publicly declaring Cold Dead Place as the point Explosions sold out and and made a mockery of their precious genre. But track the surge of soundtrack work the band received in the ensuing years and the stratospheric rise of their music as an anthem for, well just about anything on television, and it’s difficult to ignore this album’s role in popularizing “post-rock.” Truth be told, it’s an odd genre, in that no band worth their guitars involved in the movement actually seems to want to be associated with the term. Explosions are no exception to that rule and have acknowledged their desire to make music in many ways more aligned to pop, “immediately grabbing your attention and getting to your emotions,” and the music on display here saw this goal fully realized and recognized. It’s absolutely not pop music, but it does resonate with folk broadly in the same way, and one gets the impression the band are quite comfortable in that space and will happily leave thoughts of who “sold out” or “did it first” to people who actually care about that stuff.

With this context in mind, it’s all too easy to call an album like this a “concept album,” and you wouldn’t be far off the truth. The band members have mentioned a central theme of “attempted love songs” threads the five tracks together, and it remains as comfortably the most unified and complete piece of work they’ve created—indeed among the most any band has created. Almost a singular piece of five movements, every song fades and shifts into the next with consummate ease, each distinct but never apart. They are most significantly bound in their mood, every movement capable of drawing both deep melancholy and joy from each listen. Where post-rock has almost moved into self-parody when it comes to track titles, those here feel distinctly appropriate, as though truly birthed from the music. From the opening chiming notes of “First Breath After Coma,” the steady build and flurried eruption of cleanly layered tremolos on which captures a moment of awakening with delicate force, the album plays out as a journey of nostalgic snapshots. The guitars dance and gleam through “The Only Moment We Were Alone,” at times playful, at others tense, gliding through subtle dynamic shifts as it gradually sets the stage for the only real post-rock payoff we get, and it’s one that feels earned.

There’s the distant and reflecting central motifs, beautiful and haunting, that echo the submerged themes of “Six Days at the Bottom of the Ocean,” named for the plight of Russian submarine Kursk K-141 which sank and spent several days at the bottom of the ocean before oxygen supplies ran out. The cascading build grows increasingly urgent but never feels the need to dramatize things, and eases into the deeply evocative, almost funereal chimes of “Memorial.” Then there’s “Your Hand in Mine.” The band’s most known and popular song, and with very, very good reason. Featured as the backdrop for countless screen moments in need of emotional injection, it’s eight minutes of instrumental melodic perfection. Deeply steeped in sadness and yet irresistibly uplifting, the driving snares and gently ascending patterns elegantly interlace into soaring updrafts, all built around the most beautiful central riff you’ll hear. Heartachingly gorgeous, it lingers long after its final notes and softly closes the chapter on this captivating journey.

Try as they might, Explosions in the Sky haven’t quite managed to capture the lightning in a bottle they did here since. Despite a consistent catalogue and several moments that come close—the following album’s opening track is stunning and their most recent release, 2016’s The Wilderness, was masterful—The Earth is Not A Cold Dead Place managed to intersect and embody a moment, a sensation the world was feeling and couldn’t articulate. Moreover, they made it last. It’s music that could be entered into any moment in time, any grief or joy or fear, take you by the hand and lead you through it. It’s a fully realized piece of work that acknowledges all the beauty the Earth offers cannot be seen without first being devastated by it. It’s there in the album’s title and its need to harbor a negative within its statement of hope. That our default can often feel as cold and dead as the name suggests, and the true victory lies in accepting but overcoming this assumption. In a time when humanity grows ever more distant from each other and the natural surroundings that made us, and we find ourselves isolated within and left to unpick the tangle of what we see before us alone, never has there been a better time to drift on the depths of this beautiful album.