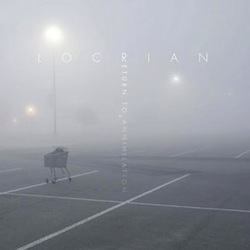 If one enters Return to Annihilation under the impression that Locrian is a “noise” band — as they so often have been described — the listener in for more than a few surprises. There’s a brief hint of dark, oozing industrial synth at the opening of “Eternal Return,” an introduction that suggests a descent into a claustrophobic cavern of malevolence. It changes course pretty quickly, though — what initially sounds like the work of a dark ambient artist morphs into synth-laden shoegaze. It’s essentially an M83 song — and a phenomenal one at that — with screaming. Though it may not be noise, it’s also a pretty easy piece of music to fall in love with.

While “Eternal Return” is the most accessible track here by a significant margin, it’s also not necessarily an outlier. The beauty of being an experimental artist, and this goes double or even triple for Locrian, is never being beholden to a particular style or approach. And so Return to Annihilation, no doubt a dark and sinister collection of brooding post-rock and tortured art, doesn’t stick to just one sound. It expands and contracts, exhales and inhales, screams and whispers; if this is “noise” it’s a highly inclusive and organic form of it.

Where “Eternal Return” is a beautiful take on a visceral approach, “A Visitation from the Wrath of Heaven” is a darkened form of a more serene sound. It pulses and throbs, for a solid seven minutes maintaining an almost meditative rhythm. Yet when it erupts, it does so quickly, booming into a Swans-like pound of dense guitars and heart-rattling rhythms. The gentle opening guitar licks of “Two Moons” are juxtaposed against a wall of distortion, gracefully dancing a dark, melodic ballet.

There’s more Swans-style pummel on the graceful doom of the title track, which grows all the more intense through its ethereal chorus of chants. And “Panorama of Mirrors,” one of the few moments that actually could pass for legit “noise,” is almost like My Bloody Valentine’s “You Made Me Realise” live assault condensed into a six-minute horror-film soundtrack. Yet for as many interesting and outright amazing moments that arise throughout Return to Annihilation, it’s not so much about song structures or climaxes as much as it is about the heavy atmosphere it creates. These are mood pieces — albeit highly active and intense mood pieces — and they’re meant to be absorbed as much as taken on, head first. It’s because of this commitment to mood that Locrian are able to make a dark, terrifying album that also manages to be so strangely beautiful, no matter how unconventionally so. This is music that’s not so much best heard as experienced.