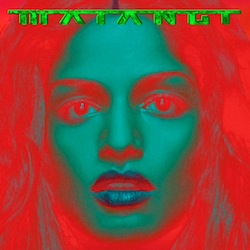 I want to think that I had some small part in first bringing M.I.A. to pop music’s surface. Her rise from multi-kulti art student to hip-hop hipster coincided with my re-entry into music journalism and underground radio. It helped that Diplo — the organizer of Maya Arulpragasam’s earliest tracks into the Piracy Funds Terrorism Vol. 1 mixtape, her early touring DJ, and her early love interest — was a transplant to my hometown of Philadelphia. That meant the pair’s exploits were reviewed regularly by alternative press, myself included; her first shows and festivals were crazed affairs, and I attended them; I pushed for her inclusion on our station’s playlist, and she granted me one of our first interviews. I bring this up because I’m in the awkward position of needing to now damn the girl with faint praise. M.I.A.’s place in music’s universe is a small and specific one; she doesn’t need to do too much to dominate the field. On Matangi not only does it seem like she’s keenly aware of that, she clumsily stumbles through her work like an athlete choking in the spotlight.

Her first two albums, Arular and Kala, were a brilliant one-two punch of alternative rap colored by worldly influences, unapologetic political sensibilities, and occasionally brilliant arrangements (“Paper Planes,” “Galang”). Third album MAYA was a thorny, underrated statement on independence in the face of ever more paranoid governments and ever more invasive and personal technology. It also explored her pop songcraft and used abrasive production that sometimes bordered on industrial. On Matangi the instrumentals grab you once again, but they have to because it feels for the first time like M.I.A.’s words and delivery simply don’t matter. Early on the title track repeats a laundry-list lyrical conceit from “Teqkilla” on MAYA (there it was liquors, here it’s geographical locations) over tribal squeaks and post-dubstep vocal flutters. Following close behind is “Warriors,” featuring a pastiche of Eastern melody, spare hip-hop hi-hats, and glitchier hooks under throwaway lines like, “Gangsters, bangers, we’re putting ’em in a trance.”

A lot of M.I.A.’s Matangi words come across slower and more deliberate, suggesting she’s lording (ladying?) over a rhyme empire with far more ego than credo. Early leaked single “Bad Girls” may ultimately represent Muslim women using driving to represent defiance and independence, but told from M.I.A.’s point-of-view in the driver’s seat it merely twists automotive and sexual metaphors — M.I.A. as Rick Ross. She riffs at least twice on Drake; there’s her sing-songy “Y.O.L.O.” response “Y.A.L.A.” (“You Always Live Again”) while “Matangi” reminds listeners outside the Second and Third Worlds that “We started at the bottom but Drake gets all the credit.” The end of the album devolves into a plodding version of urban pop, a disappointment for the woman who once brought you “Sunshowers” and “XXXO.” And even when M.I.A. spits at her fastest clip, on “Bring the Noize”? Despite referring to herself as the “overweight, heavyweight, female Slick Rick” she really reminds you of Azealia Banks.

There are scant few moments on Matangi where the pieces fit, and fewer still that continue to advance M.I.A.’s oeuvre. “Come Walk with Me” might be the closest she’s gotten to indie-rock; it’s very Vampire Weekend, even in its extreme interest in ethnic house, techno, and bass-music constructs. “aTENTion,” meanwhile, uses derivatives of the root sound “tent” as a lyrical base for a dense two-step track. But so little credit gets built up through the remainder of the album that these successes roll harmlessly to the side. The words haven’t mattered since track one, why should they now? This is really the first time M.I.A.’s cried wolf and—whether or not one threatens the flock—she’s not really compelling anyone to rush to her aid.