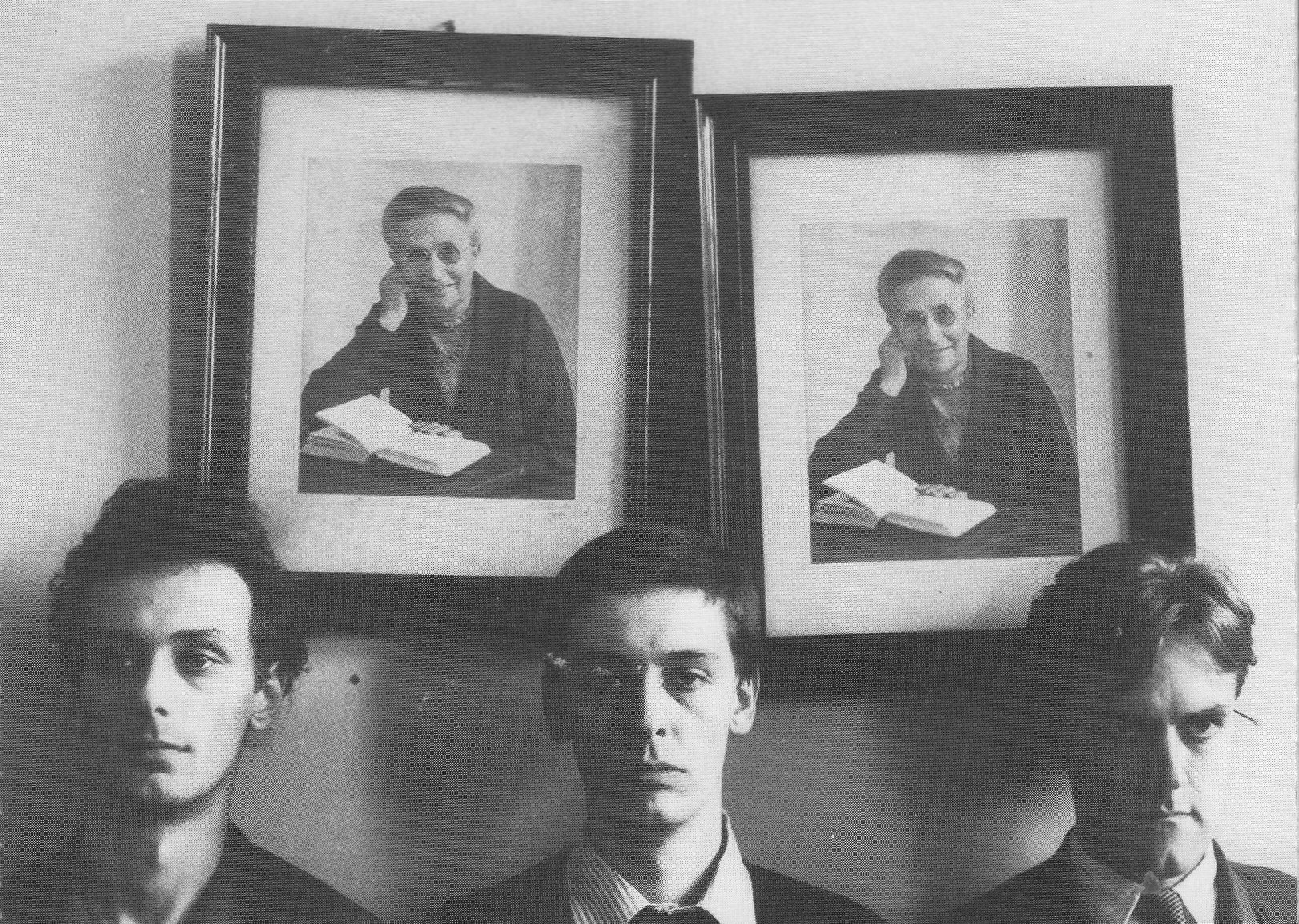 When we talk about post-punk, we almost inevitably place the emphasis on punk. Joy Division, Siouxsie and the Banshees, Wire, Talking Heads, Gang of Four, Television—they’re all bands that were born of punk and evolved from that simple, three-chord ideal into something more sophisticated and complex. Sometimes it arrived in the form of a dark disco, and sometimes it was a haunting dirge, but the direction of its outgrowth came almost exclusively from one simple, abrasively revolutionary starting point. But there are always exceptions to be discovered, and in post-punk that proved true more than a few times. The Pop Group built their abrasive beats out of the scrapyard of dub and free jazz, while Tuxedomoon crafted a darkly alluring atmosphere out of minimal synth and jazz noir. And then, out of a different world entirely, came This Heat.

Formed in 1976 by Charles Bullen, Gareth Williams and Charles Hayward, This Heat were an anomaly of the post-punk era. Their background was in experimental music and progressive rock—Hayward briefly played with Canterbury scene cult favorites Gong and Quiet Sun, the latter featuring Phil Manzanera of Roxy Music fame. And though their songwriting style embraced unpredictability, abrasion, anarchy and non-conformity, the end result was a far cry from the dark grooves of Joy Division or Gang of Four (though maybe not that far from Wire at their weirdest). Their forefathers were Throbbing Gristle, Can and Stockhausen, and if those DNA helixes tangled up into the shape of a pop song, it certainly didn’t resemble anything like an actual pop song during their five-year run.

This Heat only released three studio efforts during their brief, five years together—1979’s self-titled effort, 1981’s Deceit and the 1980 EP Health and Efficency, all of which have been reissued on vinyl for the first time since their original releases through Light in the Attic—but there’s a world of depth and curiosities to discover within the all too succinct 24 tracks that make up their catalog. Coincidentally, that number makes a conspicuous appearance in the title of one of their landmark recordings, “24 Track Loop.” The centerpiece of This Heat’s debut album, “24 Track Loop” is a pioneering track in use of tape loops to form the basis of a song, essentially using two-inch analog tape as a primitive sampling device. The darkness and chill of the track places it in the same league as the post-punk and industrial artists of the day, but there’s something very foreign about it as well. It’s almost like the post-punk take on ’70s era Miles Davis, who also used tape loops and cut-and-paste methods for reconstructing new grooves.

All one needed to know about the strange, unconventional methods used by This Heat could be found in “24 Track Loop,” a track that’s as much curiosity as it is revelation. Yet it’s also the most accessible piece of music on the group’s 1979-released self-titled debut, which juxtaposed fully formed songs with extended periods of improvisation. There are eerie, unsettling chants, avant garde ambient pieces that nod to John Cage and Karlheinz Stockhausen, chilling dirges and shrieking shards of progressive noise rock. This Heat abandoned any adherence to genre. They evaded convention. They deconstructed music itself.

“We did stuff that was edgy and floaty, and then stuff that was dense [with] lyrics about politics,” Hayward says in an interview with post-punk historian Simon Raymonde, as published in The Quietus. “Suddenly you’d go into these other places. It was the switch from one to the other that was the true confrontation for me. People would be hearing with the cultural ears of one experience and they’d be confronted with a different set of things and for a moment they wouldn’t know how to listen. And that was what was important to me, making people listen in different ways, with different ears.”

Listening to This Heat’s debut album is a bit like conditioning one’s ears to receive music differently with each drop of the needle. Each track turns the previous one’s approach upside down and inside out. It’s disorienting by design, which is part of what makes it thrilling to revisit. The first listen is like plummeting from the sky into a dangerous and unfamiliar place. It transitions from deep pulses and scratches of guitar (“Horizontal Hold”) to ominous, formless dirge (“Water”) to musique concrête (“Not Waving”) to the minimal, eerie pop ballad “Twilight Furniture,” which is one of the other rare moments of accessibility on the album, as well as a song that undoubtedly proved highly influential to Liars’ Drums Not Dead some 27 years later. With each subsequent listen, This Heat’s stunning first effort feels less immediately disorienting, which is essentially the point. Once you’ve taken to This Heat’s method of listening with different ears, their once confounding approach turns from confusing to beautiful.

Released between the band’s two studio albums is 1980’s Health and Efficiency EP, its title track the most accessible item in the band’s catalog while showcasing how their own version of accessibility is still a safe distance from normal. And that semblance of catchiness—their flirtation with conventional rock songwriting—lasts only about two and a half minutes, before it tumbles into a sort of motorik-inspired repetition, guitar riffs and rattling, stop-on-a-dime percussion tumbling over and over in a seemingly infinite loop as found sounds turn a briefly upbeat and fun post-punk gem into a menacing and twisted proto-industrial exercise. The first time I heard the song, I didn’t even know that the first part existed; when heading into KCR studios for my college radio show sometime around 2001, the music director was spinning the entirety of “Health and Efficiency” on vinyl (one of the library’s most fascinating artifacts, to be sure). What I heard was a four-minute repetition of some of the nastiest grooves to ever hit my ears.

The first few minutes of the song are much more approachable, even fun. Sounding a bit like The Fall with a sunnier disposition and a penchant for hardcore intensity, This Heat crafts a mesmerizing and hard-driving track dedicated to, well, health and efficiency. The opening lyric actually goes, “Here’s a song about the sunshine/Dedicated to the sunshine,” a far cry from the darkness and disorientation that defined so much of the band’s work. And yet, the positive outlook wasn’t in any way insincere, no matter how much of an anomaly it seems by comparison.

“We wanted to put a vibe across that wasn’t the doom thing completely, that wasn’t ‘We’re being poisoned by toxins and can’t do anything about it,'” Hayward told Reynolds in 2001. “It was very anti-punk, in a way, because there was a lot of weediness in punk, it became a cult of defeatism. The whole goth thing. So we were responding to that.”

The flipside of “Health and Efficiency,” titled “Graphic-Varispeed,” is an entirely different beast, spanning three minutes longer and eschewing melody altogether, more or less. Essentially a long ambient track using pitch control effects (hence the “Varispeed”), it reconjures the unsettling and disorienting experimental tone of the band’s debut album. That sense of foreboding, of intangible yet palpable menace, hits critical mass on the band’s second and final full-length, 1981’s Deceit. That it features their most cohesive set of songs while retaining that harrowing dread is what sets it apart as their true post-punk masterpiece.

“We were resolved that maybe the ‘song’ thing needed to be focused on,” Hayward says in an interview with Fact. “We wanted to reconnect with what had been smashed up, almost as a way of moving forward.”

On Deceit, This Heat create less a product of the studio-as-art approach of their debut as that of a group of musicians playing instruments in a room as a fully-formed band. These are rock songs, as peculiar and sometimes twisted as they end up sounding. The multi-part progression of the alternately harsh and groove-based “Paper Hats” nods to the group’s prog roots, while opening track “Sleep” showcases one of the group’s most immediate melodies. And then there’s “S.P.Q.R.”, a two-chord, galloping punk anthem that thumps and gallop with intention and accessibility. Whatever new ears are needed to allow This Heat’s more experimental tendencies to better resonate, there’s a sense of joy in hearing such tautly constructed songs through that atypical filter.

Juxtaposed with this newfound sense of immediacy is the heavy presence of Cold War terror. Inspired by a genuine fear of nuclear war and the imperialist nations that would bring it about, Deceit doesn’t feel so much like a protest record as a tense cry of panic set to intriguingly constructed melodies. “Cenotaph” is a none-too-subtle critique of the endless cycle of war, with its mentions of “The war to end all wars/And the war that came after that,” while “Paper Hats” returns to the refrain of “the sound of explosions?” Just as potent a statement is “Independence,” an ominous dub-inflected track that features the opening statements of the Declaration of Independence. And the album art echoes this overarching critique of leaders with itchy trigger fingers, its collage of photographs projected on a face, disturbingly juxtaposing images of Krushchev and Reagan with mushroom clouds against the backdrop of what seems like a primal scream.

When Deceit moves away from such explicit statement material, however, the results can be even more terrifying, as in the atonal keyboard drones and factory-crank percussion of “Triumph,” or the variable speed thumps and Czech shortwave warnings in “Radio Prague,” which sounds closer to one of the numbers stations broadcasts collected on the Conet Project than anything else of the post-punk era. It’s hard not to experience some cognitive dissonance when hearing some of the band’s best-written songs under the context of fear and intertwined with some briefly harrowing listening experiences (and maybe not coincidentally, their studio was dubbed “Cold Storage”). It’s what makes Deceit more than a powerful listen, but in fact a wholly visceral experience.

More than any other band of the post-punk era, This Heat were about changing perceptions. Not political perceptions, necessarily, though it’s impossible to extricate their music from the sense of Cold War dread that surrounded it. Rather, This Heat were communicating music in an entirely unfamiliar way, and surely it’s been processed differently by everyone that’s heard it. The Slits’ Viv Albertine told the band that their music was “sexy,” while Caribou’s Dan Snaith says that it sounds “like the future.” And though their body of work is between 35 and 40 years old, he’s not wrong. This Heat’s vision still feels like just a faint shape looming over the horizon.

Spiritualized, Art Ensemble of Chicago, This Is Not This Heat to play Big Ears Festival

Light in the Attic announces more This Heat reissues