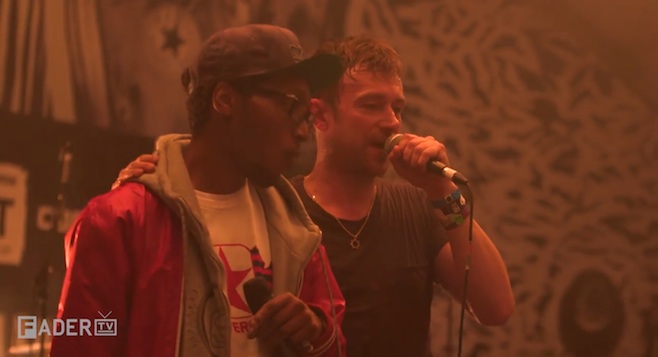 Six years ago, when we attended SXSW, we saw Del Tha Funkee Homosapien drop “Clint Eastwood” into the middle of a hit-laden set that also included “If You Must” and Deltron 3030’s “Virus.” It wasn’t exactly like seeing Gorillaz perform it, but it was still pretty damn cool. Well, as it turns out, last night in Austin, at the Fader Fort, Damon Albarn performed two Gorillaz songs: “Feel Good Inc.” with De La Soul, and “Clint Eastwood,” for which he invited both Del and Dan The Automator onstage. Snoop Dogg also joins the party, even though he’s not on the original track (though he is on Gorillaz’s third album, Plastic Beach). Check out video of the performance below, courtesy of The Fader.