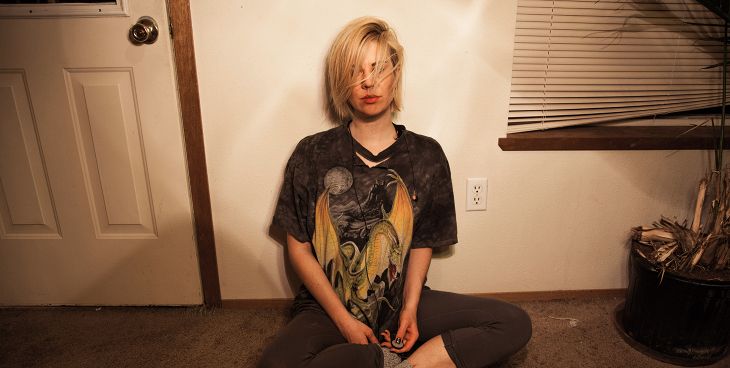 We’re already well into October and EMA’s The Future’s Void is still my pick for Album of the Year. Sitting down with Erika M. Anderson after her spellbinding, emotional set at The Space in Connecticut on Oct. 3 — which left me rather discombobulated — I tell her my opinion and she thanks me, gracefully. As a singer, EMA’s voice can both shatter glass and evoke beauty, with the latter being the most prevalent quality of the two. As a performer, she grips her guitar with authority, connects with the audience, and seems to put almost every piece of herself into her songs. In a way, because of how much she puts into it, each of EMA’s songs requires a certain recovery period. She goes into this interesting place — a deep space — and really gets into it.

“If you’re discombobulated, imagine how I feel,” EMA says. Originally from South Dakota, and now living in Portland, she stepped into the spotlight after her impressive sophomore album Past Life Martyred Saints, which no doubt led to her contract with indie leader Matador Records. EMA is a thoughtful and outspoken artist, and over the years, she has seen her popularity increase, reading all the words posted about her on the Internet. This is relevant to The Future’s Void because it’s been described as a “post-internet album.” Lyrics on the record concern opening satellites, superhighways, streams, diamond spines, and celebrities whose deaths we discovered via the web. Eventually, EMA made a NewHive zine titled Back to the Void, which she says is based on “how the Neuromancer destroyed my brain, but the tantras got my spine back.” Sure, some of the content in The Future’s Void is based on Internet phenomena, but there is a lot more to it than that, and EMA had no problem explaining. Her bandmate and recording partner, Leif Shackelford, also joined in on the conversation.

Treble: “Neuromancer” is a song on The Future’s Void, but it’s also a title of a novel by William Gibson — How does the song relate to the novel?

Erika M. Anderson: I read everything, and I recently re-read Neuromancer, which came out in 1984. There’s a lot of stuff that happens; it’s a great book. This book made up the term “web,” like the world wide web. It’s very prescient. He [Gibson] basically conceptualized the world wide web.

Leif Shackelford: It influenced modern sci-fi. Everyone is into sci-fi, whether they know it or not; they watch the movies. If you read sci-fi, that’s a special category, I guess. Everyone watches sci-fi movies. I like to think that I inspire some of the sci-fi stuff [in EMA’s music], but she reads a lot of sci-fi stuff.

EMA: You don’t read any sci-fi…

Treble: Ipads these days, that’s basically some Star Trek shit. What about The Matrix?

EMA: Obviously, The Matrix was influenced by Neuromancer. They call it the web though. They jack into all this data that’s around, and there’s one that’s absolutely huge — it’s big and white — a big white cube. He has to go in and hack into this cube.

Treble: What is the Neuromancer, exactly?

LS: It’s this omnipotent cube, like a computer program. A virtual God, I suppose.

EMA: It’s an AI (Artificial Intelligence). Anyway, I was having this freak out, psychedelic experience [at the end of 2011] where I was all weirded out and felt like the Neuromancer was inside my brain. This huge white cube made up of all the data that had been accumulated about me: All the pictures, all the words, all the videos, all this data, and it felt separate from me. It had become separate from who I was — EMA was a big white cube of data, and it wasn’t necessarily me. It was in me, but it wasn’t really connected.

Treble: So, the Back to the Void zine is about that?

EMA: Yeah, having that happen and what I think caused that to happen as far as content creation goes — data, privacy, and putting yourself out there as a female — watching yourself get cuter and cuter in pictures, even though that’s not how you feel.

Treble: OK, so what the Neuromancer made EMA to be isn’t exactly who you are, really? It’s just everyone’s perception?

EMA: It’s data, but I didn’t really think it through at the time because…I could feel this thing that was making me crazy.

Treble: What brought that out?

EMA: I’m not going to go into that. It was a stress response, being on the road a lot, and feeling worn out. I don’t know if I’ve had panic attacks or not, I don’t know. I never went to the hospital. It was a slow burner.

Treble: Is The Future’s Void based on Neuromancer?

EMA: It’s based on the book, but not about the book. Everyone is getting all this data accumulated over time. Other people are able to put it together and run algorithms. Some of that stuff made it on the record.

Treble: Like taking selfies as data? Your song “Neuromancer” starts with the lyric, “makin a living off of takin selfies / is that the way that you want to be?”

LS: As an artist, you take press photos. We tried to get professional photographers to do things, but it just wasn’t turning out, so she [EMA] bought a nice camera and would often hole up in her room and try to make good press photos. It was like the pro version of selfies.

Treble: Now, going back to all the sci-fi stuff, and how it relates to the music. That’s a good way to describe how The Future’s Void sounds at certain moments. Leif, you had an electric viola hooked into more electronics, and you played it on many songs, which I hadn’t noticed until seeing EMA live. What’s going on there?

LS: I use the viola as a synthesizer, like John Cale. With string instruments, you can do a lot of field sweeps, so it’s the closest to a synthesizer in a way. It’s very expressive, so when you add effects — classic guitar effects — you have a slightly different thing. With guitar, you hit a note, and then you’re basically done or you hit a whammy bar and you’re done, but with violin you can constantly shape and sweep and do things, so it’s a good way to make more synth sounds. I would just play a synth, but viola adds more elements.

EMA: When we’re recording, I’ll do the lyrics and the skeletons of the songs, and then we’ll work through the sounds and the vibes together. 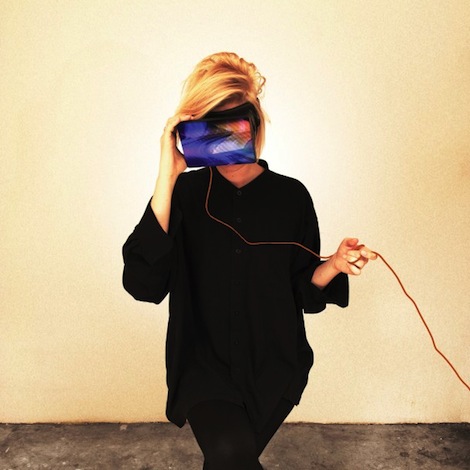 Treble: Your performance was pretty intense, intimidating even. But it was honest. Does it feel that way to you?

EMA: Maybe sometimes. It depends, but I try to end in a way that connects and empowers and intimidates.

Treble: I’d say that connection was well received. You ended the set with “Dead Celebrity,” calling people to the front of the stage, and clasping their hands one by one in this slow motion that was very raw. What’s the meaning?

EMA: To be honest, when I think of that song, I wasn’t really thinking of the celebrities that were dead, but in some ways the celebrities who were still alive, but so alienated from other people via their fame. I think of Lindsay Lohan being in a fancy hotel room on a bunch of pills, not able to go anywhere. Or, she can’t connect with other humans because everyone already has this idea of her. Some of these people do want to emulate their personas or personalities just to be free of it. They have a meltdown like, fuck it — Britney Spears shaving her head — as if to say, “I’m not that anymore, so don’t.”

Treble: The public seems to perceive the death of a celebrity via the Internet, and then some people feel the need to say something about it like they knew them, even though they didn’t at all. What’s your relationship with the Internet? Is it love and hate?

EMA: Yeah. There’s no way to say that the Internet is bad because it’s so part of everything that we do. I also think that there’s been a ton of social justice campaigns and awareness campaigns that have come about as far as building a lot of empathy between people, telling stories that would otherwise not be told. You can’t be like, “The Internet is terrible.” For me, you have to check out the zine [Back to the Void] and what I did with that.

Treble: The album and the zine both have “Void” in the name. Without the Internet, maybe you wouldn’t have been able to tell your story.

EMA: Someone told me to put “Void” in the name to have this connection with the album and the zine. I have total control of this zine and take my image back and tell my story. In the end, doing that, I feel very empowered by all those tools. It’s this moment of getting my power back, telling my story, and remaking everything exactly how I want it.

Treble: You’ve been compared to some other badass performers like PJ Harvey; are there other artists whose music you’ve found to be empowering?

EMA: I miss the ladies who are kind of grotesque, and that’s another thing that makes me want to be more gnarly. People like Diamanda Galas — just fucking gnarly! In this age, the grotesqueness is missed in women — Kathleen Hannah, Babes in Toyland, L7 — the idea of throwing your tampon into the crowd.

Treble: What about Miley Cyrus? She and Kathleen Hannah made a connection and might make music together. Because the Internet.

EMA: I don’t have much of a comment on her. She has a very weird vibe to me, very hard to read.

EMA: Miley Cyrus sets off my gay-dar. That’s all I have to say.