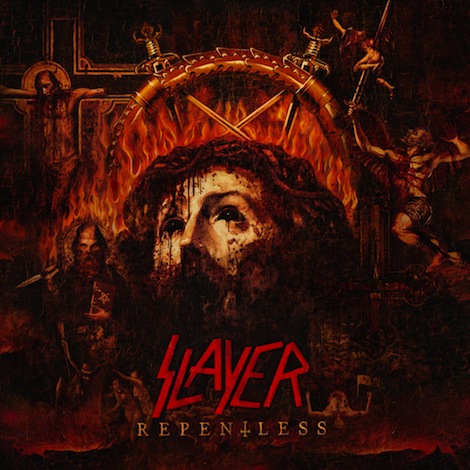 Thrash metal legends Slayer are returning with their first new album since 2009’s World Painted Blood. It’s called Repentless, and it’s being released on Sept. 11. It’s the band’s first album since the death of guitarist Jeff Hanneman and the departure of drummer Dave Lombardo. Today, the band released a visualizer video of the title track via Rolling Stone, which you can listen to below. Also, they’ve revealed the reliably evil-looking artwork (which you can see above) and the album’s tracklist, which you can find below.

Slayer’s landmark 1986 album Reign in Blood is near the top on the list of our Top 100 Metal Albums.

Dave Lombardo, formerly of Slayer, to perform with reunited Misfits