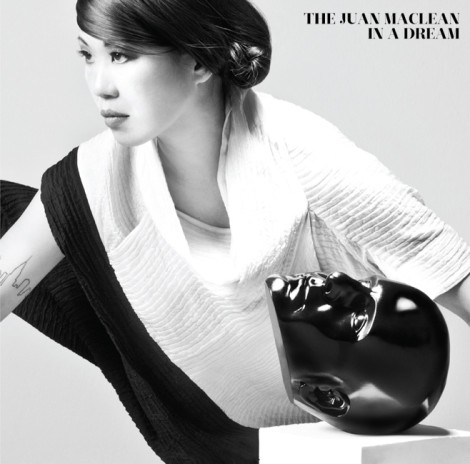 Nature, as they say, abhors a vacuum, and when LCD Soundsystem’s James Murphy locked the doors behind him and went whistling on his merry way after 2010’s This Is Happening, DFA Records was left with a considerably large open space. Filling that incipient void certainly wouldn’t be without its complications; as one of the founders of the label, LCD’s James Murphy not only founded its flagship act, but actually helped shape the sound associated with the label, both via his own work and through collaboration with other bands like The Rapture. But LCD Soundsystem’s departure off the DFA stage was three years ago; since then, the label has expanded and been fleshed out with impressive and diverse releases by the likes of Holy Ghost, Factory Floor and Sinkane, each representing a uniquely different vision for the future of the New York City label. And yet, there’s also a fairly easy answer to which musicians are the rightful heirs to the DFA throne.

The Juan Maclean, founded by former Six Finger Satellite guitarist John Maclean and aided by former ex-LCD member Nancy Whang, have been releasing funk-heavy, cosmic disco singles via DFA since early 2002, beating out the release of “Losing My Edge” by a good six months or so. And since then, The Juan Maclean has gradually evolved into one of the most sophisticated progressive disco outfits in the United States. The group’s 2005 collection of robot funk, Less Than Human, blended kitsch with concrete grooves, while 2009’s The Future Will Come found the duo allowing more space into their music, and offering one positively epic slice of synth-based euphoria in “Happy House.” And though they were always at least in the honor’s class of post-millennial indie disco, they were seemingly a few steps away from being valedictorians.

That all changes with In A Dream. The group’s third full-length, In A Dream, feels fully realized — not just a logical extension of the Moroder- and Arthur Russell-inspired pulsations of their first two albums, but a refinement of them. It’s certainly sexier and more stylish than its predecessors; the cover image depicting Whang reclining against a mannequin’s head evokes a certain sense of luxury that’s palpable in these lush, widescreen compositions. But on a song-by-song basis, In A Dream feels the least fractured of the group’s releases, built not on the backs of some great singles but rather a continuous flow of great tracks.

It doesn’t hurt that the album starts off with one of the strongest songs in their catalog, the eight-minute From Here To Eternity-style banger, “A Place Called Space.” It’s the kind of track that The Juan Maclean were made to write, throbbing with synth arpeggios and an increasingly intense buzz — not to mention a nod to Sun Ra. It’s also sort of hard to believe that it took them until now to release a song called “A Place Called Space,” but they certainly saved it for one of their brightest moments.

As with their prior albums, there’s a fair amount of diversity within these club creations: a soulful house hybrid on “Here I Am,” stunning synth-pop on the gorgeous “You Were a Runaway,” a slow and sultry ’80s-informed funk on “Running Back to You,” and space-disco euphoria on “I’ve Waited for So Long.” And the deeper into the album you get, it grows more apparent why Whang’s face is on the cover, but Maclean’s isn’t. More than on any other album, she takes center stage here, both helping to shape the sound of the record while taking on the role of de facto lead singer, her distinctive vocals both more ethereal and edgier than Maclean’s own. She’s a natural fit for the album’s darkly intriguing jams — punk in spirit, but diva in execution.

Sometimes, In A Dream succeeds on simplicity, like the neon flash of “Charlotte” or the suitably titled “A Simple Design.” But the reason that it’s their best album has little to do with how big it is; The Future Will Come is arguably bigger, and could have possibly been reined in just a little. No, In A Dream is their best album because it reduces The Juan Maclean down to its most potent elements. It’s still reasonably big, but Maclean and Whang make the most of its 58 minutes, leaving little room for fat or fluff. In the past, their knack for sensorially stimulating beats made them all stars; the careful honing of their songwriting has now made them MVPs.

The Juan MacLean announce new album, In A Dream

The Juan Maclean : The Future Will Come