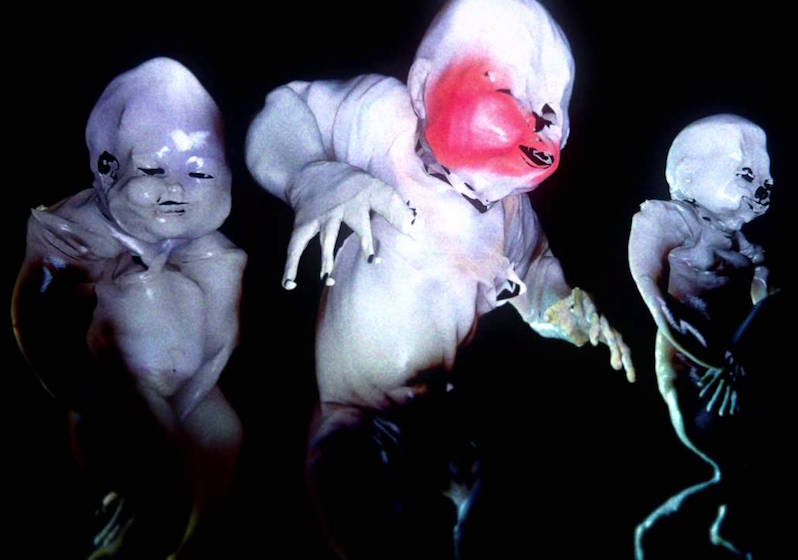 This week’s topic: It’s almost Halloween! And all we can think about right now is the scary, spooky and downright freakish, so here goes: What artist would you like to hear score a horror movie?


Adam Blyweiss: We’ve written at length before about recent trends in dark electronic music, building on the industrial noise of the 1980s and early 1990s with the samples, loops, and manipulative technologies of today’s MPCs and laptops. If there’s one artist who could transition their targeted album sounds to a horror-film context, it might be Arca. The Venezuelan producer’s wobbly soundcraft has supported hip-hop (Frank Ocean, Kanye West), art-pop (Bjork, Babyfather), and her own digitized patchwork LPs. Most of her work leans moody and macabre, and her leftfield takes on soul, rap, and breaks are full of scraping atmospheres, stomping rhythms, and distorted vocals. That could be ideal for psychological or body horror in modern-day and near-future settings.

Sam Pryce: I would like to see Pharmakon score the most blood-curdlingly gory snuff(-esque) movie. Merzbow or The Cherry Point could probably make any film, however tame, horrifying or at least very uncomfortable in some way. Slightly unrelated, but a notable mention might be Coil’s abandoned soundtrack to Clive Barker’s Hellraiser which is better than the film’s actual score.

Jeff Terich: It’s funny that, just before we put together this feature, Dominick Fernow actually composed two albums’ worth of Halloween-themed recordings, as Prurient is an artist whose skills for the ominous, intense and chilling (read: very cold) could be put to great effect within the scope of horror cinema. Though his would be a more visceral, ominous kind of score. A more ornate and grand score, with climactic and even beautiful moments, would best be served by an artist like Lingua Ignota, whose new album Caligula is something of a compendium of horrors on its own, however stunningly rendered. And, lastly, perhaps it’s because I just saw the band live and I’m still buzzing from the strange high of their psychedelic metal presence, but Oranssi Pazuzu would do something very cool with a horror soundtrack—I’m sure of this. Considering they’re so heavily influenced by prog from the likes of Goblin, whose music helped make the original Suspiria what it is, they’d bring groove and menace to some otherworldly haunts.

John-Paul Shiver: Jeff Mills STARTED Manic. For over 25 years, his techno compositions have fueled black and white fever dreams of hysteria, using quick emotive ideas, hectic with intensity. He didn’t just stumble upon a warped rhythm here, a confined synth there. Attribute that understanding to growing up in Detroit. Or growing up Black in Deeeeetroit. It makes no difference. Mills music has always channeled that alien, outsiders voice. But it’s “4Art,” easily the walk-on music for Alfred Hitchcock if he was alive today, that could give a decent reading on whether somebody actually knows their shit. If they really studied Mills.

If they really wanna get shook. “4Art”, dispels a specific mastery of suspense, turning listeners into voyeurs with every progression, maximizing anxiety and fear.  Raw acoustics, shifting basslines, plinking tones and the snapback wave of strings, finally cuts the tension on the dance floor and in the street.

Jacob Nierenberg: I’ve never had a taste for horror movies, but I would consider buying a ticket to one if it were scored by Aphex Twin. Richard D. James once claimed that the glacial, beatless worlds of Selected Ambient Works Volume II were inspired by lucid dreaming. For the rest of us, SAW II sounds like nightmare fuel, full of metallic groans (“Tree”), ghostly drones (“Parallel Stripes”) and alien tones (“White Blur 2”); each of its two dozen songs could be the theme for an nonexistent horror film, be it a psychological thriller or a gory slasher. It’s easy to understand why James has seldom returned to the well of ambient music in the 25 years since SAW II was released—after all, there’s no improving upon perfection—but at the same time, it’s easy to wish that he would, given how goddamn good he is at it. Scary good, one might say.

Wil Lewellyn: There are soundtracks to horror movies with Skinny Puppy songs on it, but I would like to hear them score an entire horror movie. I envision something with dystopian elements, perhaps a vegan serial killer who makes people eat their families at a deserted Epcot like place called Too Dark Park—OK, there is the elevator pitch.

Tyler Dunston: Aldous Harding has all she needs to make a subtly terrifying horror film soundtrack—she’s the kind of artist with the patience to effectively build tension, making moments of release more gratifying (or more frightening). “Imagining My Man,” off her excellent 2017 album Party, is pretty quiet before it gets to that surprising shout—“All my life (hey!) I’ve had to fight to stay.” It’s akin to a kind of sonic jump scare on its own. In the context of a horror score, she could easily take advantage of her knack for tension and release. And with haunting song titles like, “What If Birds Aren’t Singing They’re Screaming,” “Swell Does the Skull,” and “Heaven Is Empty,” she’s already halfway there. Hell, “What If Birds…” deserves a place on a horror soundtrack for the first stanza alone:
“What if birds aren’t singing they’re screaming
I got high, I thought I saw an angel
But he was just a ghost
He was making wooden posts out of my family’”

Konstantin Rega: For Halloween haunts and spooks, I think artist/pianist Philip Glass would be great. His minimalist aesthetic and unsettling style of understated elegance delivers chills and thrills. I can just picture him composing the soundtrack to an art house horror flick (especially if it was by Andrei Tarkovsky or Park Chan-wook) that would really expose the underlying psychological terror and tension of the narrative.