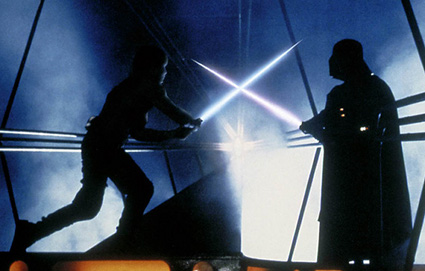 “The Empire Strikes Back”
John Williams
1980

Yes, the original theme had appeared three years prior in the original Star Wars (that’s Episode IV: A New Hope for you completists). Yes, that first film’s “Cantina Band” is about as close as the series came to generating a pop song. Yes, both films were surrounded on all sides by music from what is really Williams’ golden period: Jaws, Close Encounters of the Third Kind, Superman, Raiders of the Lost Ark, E.T. But really, just stop it. The soundtrack and, in fact, not just this movie but Return of the Jedi after it are anchored by a reprise of the main title theme, “The Imperial March (Darth Vader’s Theme),” and a sweeping dramatic/love theme meant for Princess Leia and Han Solo. With the gift of George Lucas’ vision, the movie helped sell the music. Now, with the gift of time and skill, John Williams and the London Symphony Orchestra’s music sells and retells the movie. Hearing it, you just know where Yoda is sharing his gifts of The Force, when our heroes realize the Millennium Falcon isn’t in a cave, and at what point Vader makes his tragic confrontation with Luke Skywalker. – AB 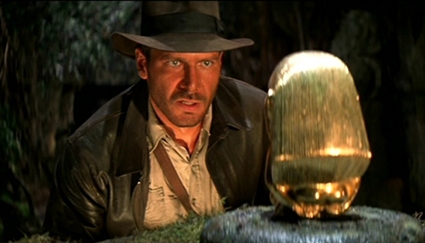 John Williams is synonymous with blockbuster adventure, his scores having laid the musical foundation for silver screen heroes time and again, from Luke Skywalker to the Man of Steel. For sheer edge-of-seat thrills, however, the prize goes to Raiders of the Lost Ark, however, in which Williams matches the onscreen action note-for-note, from Indiana Jones’ legendary boulder chase, to the crawling of spiders, to the immortal “Raiders March,” which heralds the triumphant Jones and his chase of priceless artifacts, even as politics and Nazis seem to try to foil him at every turn (even if the only thing that might really stop him is snakes). Williams’ score is the sound of a magnificent journey, and one worth taking time and time again. – JT 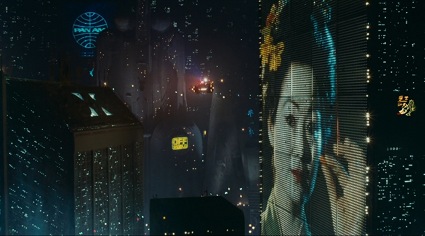 None of us really know what the future is going to sound like, but an idealized (even if dystopic) future surely resembles Vangelis’ soundtrack to Ridley Scott’s Blade Runner. A largely ambient electronic score, Vangelis’ music juxtaposes futuristic sounds with the slightest touch of Chinese influence, as reflected in the vision of 2019 (that’s only in six years!) Los Angeles that so closely resembles Hong Kong. The juxtaposition of abstract classical elements and pulsing electronics fuses perfectly with the mysterious cyber noir in the film, in which replicants can be easily mistaken for human, and vice versa. And listening back to the now 30-year-old score, the future-noir vibe that Vangelis creates most certainly sounds ahead of its time, with awe-inspiring pieces like “Blush Response” being referenced in recent albums like Emeralds’ Does It Look Like I’m Here? or Oneohtrix Point Never’s Returnal. Which means this really is what the future sounds like. – JT 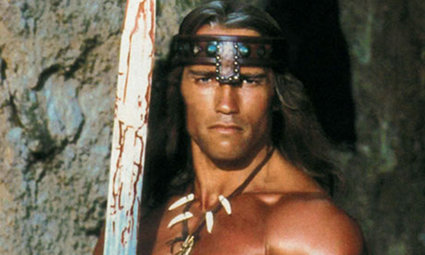 Conan the Barbarian is a lot of things — a mercilessly violent vengeance tale, a fantasy epic, a showcase for Arnold Schwarzenegger’s bodybuilder physique, and a source of occasional hilarity (the giant snake fight scene stands out, in particular). But even a flawed epic is still an epic, and it deserves an epic score. Enter Basil Poledouris, who had previously scored Big Wednesday, and whose work afterward includes Robocop and The Hunt for Red October. Yet Conan might be his most soaring achievement, hitting heroic heights with “Riddle of Steel,” and unexpectedly sprightly ones with “The Orgy.” Above all, Poledouris created the ultimate score for questing, and for that he’ll remain one of the all-time greats. – JT 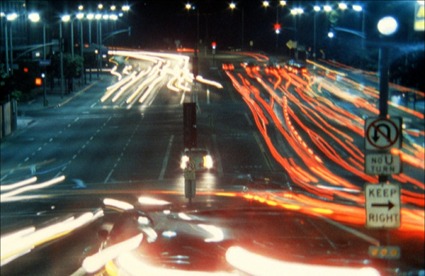 I remember my first Koyaanisqatsiexperience. The beginning creeped me out a bit thanks to that low-pitched, devilish voice singing Koy-aan-is-qat-si. Then when the bright, time-lapse clouds floated onto the screen as the horns in “Cloudscape” snuck in, I felt like I was in exhilarating flight (I was sober too). Glass’ score is to Koyaanisqatsiwhat dialogue is to any other story. The songs transcend the visuals into something more than a series of random shots: an epic story of our reality. Watching without the music is akin to a Wonder Years episode without Daniel Stern’s narration — it doesn’t make any sense. The music itself is extremely Glass-like, and might be one of his best works…which says a lot — the man’s been making music for a long time.  – RM 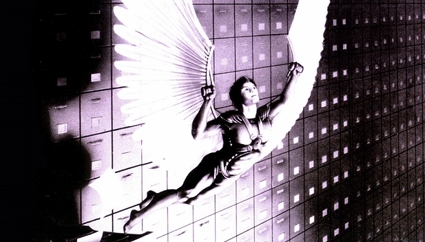 Terry Gilliam’s Monty Python-meets-1984 film Brazil (made, coincidentally, in 1984) is perhaps one of the most underappreciated hidden classics of the ’80s. Admittedly, this writer is an incorrigible cinephile and reserves a special place in his heart for Brazil, but by any standard the film belongs in the pantheon of great later-20th century films. Though I am passionate enough to write a dissertation about Gilliam’s masterpiece, for the purposes of this assignment I’m going to focus on Michael Kamen’s contribution to it. His score, the leitmotif of which (“Aquarela do Brasil”) gives the film its name, is integral to the success that the film achieves in rendering its highly ambitious and complex vision. Throughout jarring tonal shifts — from breakneck action to terrifying suspense to escapist fantasy to, finally, bleak realism — Kamen manages to highlight and navigate the events of the film with aplomb, never overwhelming or distracting from the narrative on the screen while still demanding to be heard. This is enough to make it an exemplary film score, but Kamen really succeeds in the way he perfectly integrates the titular song — which has a checkered background of its own — into the work, allowing its meaning (or what it signifies) to evolve along with Gilliam’s vision. The 1985 Oscar for Best Score went to Out of Africa; the Academy was wrong. – Connor Brown 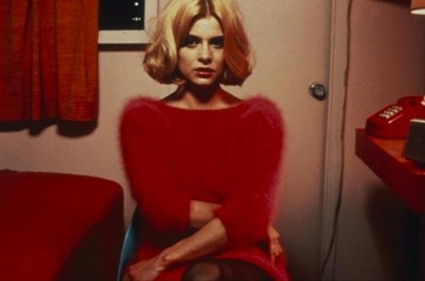 A man finds himself on fire in the trailer where he lives. He looks for his wife, who he had chained to the radiator before he fell asleep, and his son, but they are long gone. After he puts himself out on the cold ground, he begins running. He runs until all signs of man are gone. There is nothing but the desert. All this happens before the narrative of the film begins, and the man, Travis (Harry Dean Stanton), emerges from the wasteland to set things as right as they can be. But Ry Cooder captures something of this violent end in the bottomed-out blues he recorded for the soundtrack, and when the paradise lost that preceded the couple’s split does appear, in homemade super-8 films screened within the film, it is accompanied by the melancholic delicacy of Cooder’s arrangement of the traditional ranchera, “Canción Mixteca.” Memory is fragile, and so is the grace of man. Things come apart. The film has a happy ending of sorts, but it is Travis’s fate to drive back into the night, alone, and what better song for such a fate than Cooder’s rickety take on Blind Willie Johnson’s “Dark Was the Night,” the call of desolation itself. – TP 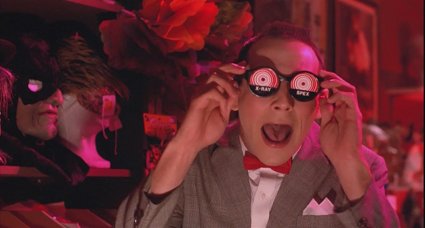 Much like Bernard Herrmann or Nino Rota, Danny Elfman is prolific enough to have an entire list devoted to his own scores, which, in addition to decades of collaboration with Tim Burton, include the iconic “Simpsons” theme. Admittedly, choosing Pee-Wee’s Big Adventure as one of the best of the bunch requires a certain amount of personal nostalgia and warm-heartedness on my part, but even in a career full of character and childlike wonder, this score stands out as one of the most vibrant. The best scores are often those in which the musical cues can make you instantly picture the scene in your head, and every minute of music Elfman composed for Pee-Wee does that in spades, from the chase across the Hollywood movie lot to the hilariously horrific clown dream, as well as his encounters with Simone and Large Marge. Surely Elfman deserves credit for countless other flicks, but this one wins for punctuating every note with an exclamation mark. – JT 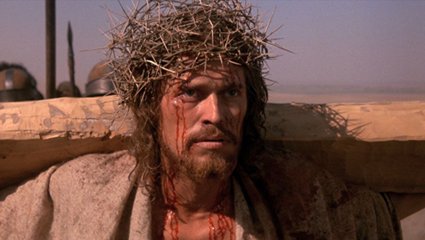 Passion (Music for “The Last Temptation of Christ”)
Peter Gabriel
1989

Martin Scorsese’s 1989 film The Last Temptation of Christ adapted Nikos Kazantzakis’ vision of Jesus considering detours from his destined path. It remains one of the world’s most critically divisive movies — lauded with Oscar and Golden Globe nominations, and colored with a spectrum of hate ranging from Razzie awards to Molotov cocktails. Peter Gabriel’s score is arguably the best, most memorable takeaway from the film, and even that required some form of distance from the actual movie. Retooled for months after the film’s release, Passion ended up being the soundtrack that wasn’t. It set a mood for the actual story of the sacred versus the profane, but more importantly it introduced Gabriel’s audience to the mesmerizing sounds surrounding his WOMAD organization. His regular session pros like David Bottrill and Nathan East were joined by household names of the Second and Third World: L. Shankar, Youssou N’Dour, Hossam Ramzy, Nusrat Fateh Ali Khan. Amid a catalog already laden with worldly instrumentation, technological advances, and challenging and beautiful musical scenery, Passion might be surpassed only by So as Gabriel’s highest artistic peak. – AB 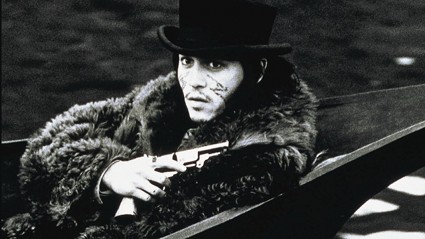 The image is of Neil Young standing before a projection of a cut of Dead Man, in a home studio, if I am not mistaken, Old Black slung over his shoulder, improvising the music as he watches scenes from the film, as he looks into the core of it. He seems to find something in Jarmusch’s film that takes him to a place related to the places he had already gone with his guitar over the years, but a little further out, or maybe hidden just behind the other reflections of himself he had already discovered in ragged figures of amplified electricity. The soundtrack as released doesn’t quite do justice to the power of the music in the film, even with Johnny Depp’s voice evenly reeling out lines from The Marriage of Heaven and Hell. William Blake’s mystic empiricism and the mythic use that he made of it are already in the music, transfigured: traveling west, toward the end of what is known, the great mirror of the sea extending endlessly…the violence of locomotion, the black motive behind the mercenary killing of buffalo, the hallucinatory village on the riverside, and, amidst it all, the strange opportunity to finally live just before one is to die. – TP