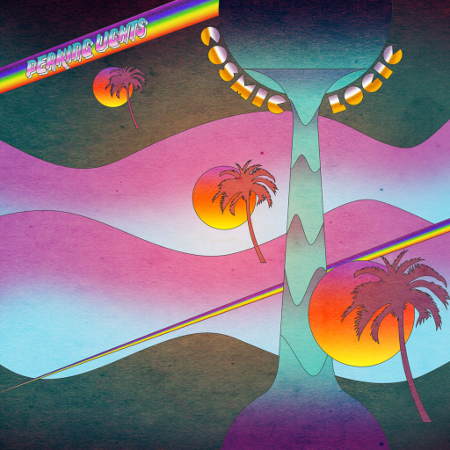 A few years back I got hooked on the Peaking Lights record 936, and to this day if I hear any track from it, I suddenly feel as if I’m sitting in a field of grass, shone on by lukewarm Scottish sun, sipping a beer. More than that though, it puts me into a certain mental orbit, in a double sense. I both feel my mind begin to carry out a circular journeying motion, and pass into a distinctive sphere of experience marked by the hallucination of tapering jets of color, and the onset of a warm feeling of well-being tracing a spiral as it loops upward around my vertebrae. It was like a drug. I put it on. I orbited in a certain orbit.

The follow-up, Lucifer, was enjoyable enough, but I didn’t feel the same compulsion to dive back into it again and again. My favorite track from that record was “Dream Beat,” and listening to it now it seems to operate in a territory about halfway between 936 and my favorites from the latest Peaking Lights record, Cosmic Logic. Maybe these tunes could be grouped together as “danceable jungle dreams dreamed on a beach.” Or, we could say that they are, maybe, “dub-inflected, post-punk, proto-house exotica,” and that they make you want to interrupt mental meanders with improvised dance moves.

“Eyes to the Sea” is the one I have been playing on repeat. It sounds more like early house than anything else they’ve done, and all the elements just seem to sit right. The acid line, the twinkling piano in the distance, the Tom-Tom-Club vocal (think “Lorelei”) – I’m not sure if it makes me want to drive through a desert in the twilight with the windows down, or pull twitchy shapes around a bonfire. Maybe neither, but I suspect that both could both be profitably done. “Eyes” rolls right into the wide open cosmic highway of “Bad with the Good,” which somehow gets me thinking of the neutral mix of Model 500s classic, “The Chase.” So, again, I guess this is driving music, but of a more interstellar variety.

“New Grrrls” is both the most personal thing on the record, lyrically, and Indra Dunis’ reversion of Le Tigre’s “Hot Topic.” Or, at least, that’s what it’s like for a moment, when she name checks Lydia Lunch, Yoko Ono, Kim Gordon, Joan Jett, and, of course, Kathleen Hanna. The need for inspiring female role models is here only a part of the story though, as Dunis sketches out moments of her own journey as well as gesturing toward bigger societal problems, like violence and low wages. The specificity of the lyrics stands out here, as for the most part elsewhere they seem quite general, just so much warm and ephemeral space dust to float over the trippy, semi-tropical grooves fashioned by Aaron Coynes. Which isn’t to say the words are interchangeable, but rather to say that I get lost in the trip, and lines like “telephone call from space /calling all the human race” are just aspects of a mood that they don’t in the least control or express.

“Infinite Trips” is a happy little kraut-footed space rock tumble, and it opens the record with a six-foot wide smile of sparkling candy teeth. It’s a manner of beginning toward which I am more than sympathetic. “Everyone and Us” is a synth-pop song lobbed in from the re-remembered ’80s, and as it contains the line, “we can dance if we don’t use our feet,” it is destined to become a late-night classic at my house, where the wooden floors immediately transfer all vibrations to the turntable. As for “Breakdown,” it reminds me of about six songs that I can’t remember the names of, and which probably don’t exist, but it’s got a heaviness about it that balances out all that astral floating occasioned by the majority of the record. It’s cosmically logical.

I’m not sure if this one will pull me in quite so often, or with such force, as 936. But there does seem to be a lot to get lost in here, and I can’t help feeling that it should have come out at the beginning of the summer so that it could have soundtracked me sitting in a swimming pool on a floaty thing drinking Anchor California Lager.

Hold On To Your Genre : Dub