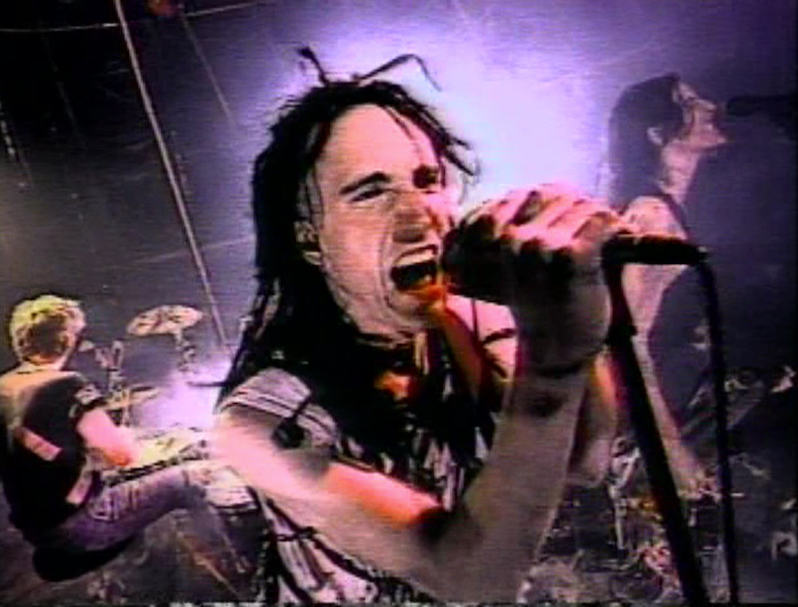 Trent Reznor was a child of divorce, a high school band and drama geek who sought something beyond the Pennsylvania farmland of his youth, colored as it was through the lenses of plays, jazz, comics, TV, books and radio. He dropped out of college to eke out a subsistence existence in music. Much like high school and college athletes in the face of long odds of joining NCAA or pro teams, Reznor arrived in the clubs and recording studios of Cleveland where his sheltered reality clashed with his fantastical desire to succeed. Yet succeed he did, and the world has made a justifiably huge deal of recognizing the release 30 years ago of his first single and first album as Nine Inch Nails: ”Down In It” and Pretty Hate Machine, respectively. These collectively paint a portrait of the artist as a tortured and isolated young man, but truth be told Reznor was never alone in feeling alone, not even as his career dawned in 1989.

The spread of Reznor’s genre of choice—industrial music—at this time at least partly grew out of musicians’ sociopolitical awareness, and a wide redress of conservatism and public austerity in a manner not seen since the 1960s. Ronald Reagan’s popular, populist demands on Russia’s Mikhail Gorbachev and Communist Eastern Europe began to bear fruit, from the Singing Revolution and Solidarity to perestroika and the eventual fall of the Berlin Wall. And as the Reagan era transitioned to the Bush era, the subversion of regimes by work like the Iran-Contra affair appeared to reach something resembling a whimpering end. Not all was progress, however, as this period also witnessed the birth of Al Qaeda in the aftermath of the Soviet-Afghan War and China’s horrifying clampdown on pro-democracy protests in Tienanmen Square.

When Daphne Carr released her 2011 survey of Pretty Hate Machine in Bloomsbury Publishing’s 33⅓ series, much to readers’ chagrin she addressed the album as a release valve for societal stress and not the creative processes behind it. Her analysis may have been boring, but it wasn’t wrong. The years leading up to and just after 1989 featured a string of celebrities’ significant attempts to beat back worldwide ills and evils: Live Aid, Comic Relief, Artists United Against Apartheid. Industrial music stood as a riskier alternative to these more accessible centrist stars. From Front Line Assembly’s broad anti-fascist strokes on Gashed Senses & Crossfire to specific lyrics and imagery in “Tin Omen” from Skinny Puppy’s Rabies album, this damning medium reminded music fans of an ongoing, vigilant need for individual anger and radical action.

The year 1989 was also particularly pivotal in exposing the dark underbelly of the ideal of yuppie wealth accumulation, and indeed of material successes and excesses in general. NASA had informed us the prior year that man-made global warming was officially here, and the grounding of the Exxon Valdez was this year’s most memorable example of man’s continuing inhumanity toward nature. The democratization and miniaturization of entertainment, information, and data-gathering also began in earnest with the first widespread use of things like the Internet, global positioning systems, even Nintendo’s Game Boy.

The Simpsons and Seinfeld each debuted this year, poking pins in the social-more balloon of the middle and upper classes, while the failure of a series of American banks and savings-and-loan institutions cut holes in their financial safety nets. The martial, issue-based synth-funk of KMFDM’s “More and Faster” from 1989’s UAIOE was a typical industrial music response: fun but difficult, where you couldn’t quite tell if Sascha Konietzko and En Esch’s observations were detached or demanding. “Thousands are homeless/And the rest are missin’”—is that bottle full of wine to numb the pain, or gasoline for a Molotov?

The aesthetic of KMFDM and many other rising genre acts spoke to the healthy sleaze factor of late-1980s industrial music, tied as it was to a variety of subcultures that seem like acceptable fandoms and fetishes today but were decidedly shocking back then. Industrial artists circled back from post-punk and New Wave to embrace a “metal” categorization and all of the sidelong glances that came with it. The presentation of socially provocative themes and embrace of nihilism, misanthropy, and self-doubt often came with healthy doses of processed and atonal guitars, dressed in revisited and revised rock costumes: drag and glam, military uniforms, the leather of bikers and punk and BDSM.

Al Jourgensen closed his eyes and led Ministry down this path not just unscathed but empowered like never before, buoyed by the experimental nature of his relationship with Wax Trax! Records, the major-label perks of Sire, and his own creative restlessness. The Mind is a Terrible Thing to Taste was released in November of 1989, about three weeks after Pretty Hate Machine, the rapid-fire guitars and grinding rhythms of Reznor’s closing track “Ringfinger” unconsciously bleeding directly into the intro of Ministry’s legendary opening cut “Thieves.” Ministry delivered to mosh pits the same emotional politics Nine Inch Nails was bringing to dancefloors and sad-panda mixtapes.

This soundcraft criss-crossed genre and racial lines, and shared technological DNA. Industrial and rap music of the day each employed synths and canned digital rhythms, and were especially adept at building up atmosphere and even dialogue through sampledelica. Hip-hop’s progression from one decade to the next produced some of its most musically dense compositions. In 1989 alone De La Soul’s 3 Feet High and Rising, Beastie Boys’ Paul’s Boutique, and Public Enemy’s “Fight the Power” (ahead of Fear of a Black Planet) all saw release, all landmarks of sample-based music before litigation and clearances forced artists to more seriously consider production budgets.

It was no mistake that Reznor’s debut featured a PE namecheck in the liner notes, a lazy rap through “Down In It,” and programmed turntable scratches on “Ringfinger.” Indeed, Consolidated’s industrial rap and Meat Beat Manifesto’s metallic breaks on Storm the Studio arrived this year as well, and Godflesh’s Justin Broadrick took immense pleasure in modifying the output of an Alesis HR-16 to approximate a fucked-up version of Run DMC on Streetcleaner. Remove the vocals from some of these instrumentals across both styles, and they might be indistinguishable.

There were other disparate assistants who lifted up industrial’s sounds and ouevre throughout 1989. In so-called college rock, The Jesus and Mary Chain’s Automatic found Scotland’s noisy Reid brothers standing in a room with a bass synth and a drum machine to produce arguably their biggest hit, “Head On.” Art-rock godhead Peter Gabriel brought forward the players and rhythms of the Second and Third Worlds, often sampled by industrial musicians, for his legendary film soundtrack Passion. We can even point to the stuttering, scraping instrumentation and aggressively sourced look—the video choreography and sets, the military costuming—used throughout Janet Jackson’s Rhythm Nation 1814. But there was a clear, ideal model for Trent Reznor’s machinations of business and talent (summarized by S. Alexander Reed in Assimilate: A Critical History of Industrial Music) to bring synth-pop to unhyphenated pop success: Depeche Mode.

The British quartet had parlayed their earliest, tinny melodies of love and obsession into more nuanced, textured, and often darker artistic statements, cementing their status as a centerpiece of the Mute imprint. This year saw the release of 101, the concert film and soundtrack documenting DM’s journey to a massive 1988 tour finale at the Rose Bowl in Pasadena, California. Almost a year after the show, and two months after 101 hit stores, the band re-entered the studio to start recording what would become 1990’s Violator. The world’s first taste of the album is arguably the band’s #1 or #1a defining song; released three weeks before “Down In It,” “Personal Jesus” used the countrified guitar of their “Route 66” cover and stomping, gasping percussion to warp the admiration Priscilla Presley felt for her husband Elvis into the kind of blind devotion reserved for televangelists.

Industrial musicians in the avant garde and their more accessible ilk in fields like post-punk and New Wave had long found reasons to feel unmoored—artists, moody and visionary on a variety of levels, battling ennui in their own social interactions and dread in the news of the day. Cognoscenti of the form often look to 1987 and 1988 as its bellwether years of underground quality, and might consider the NIN-Ministry-Marilyn Manson explosion of 1992 through 1994 its highest commercial peak. Pretty Hate Machine in 1989 shared NIN’s disaffected, brutal, yet melodic observations with a growing swath of young society. But it was just one of many tectonic plates that started to shift for the genre that year, transforming industrial from mere sounds of the fringe and inspirations for the mainstream into the mainstream itself.