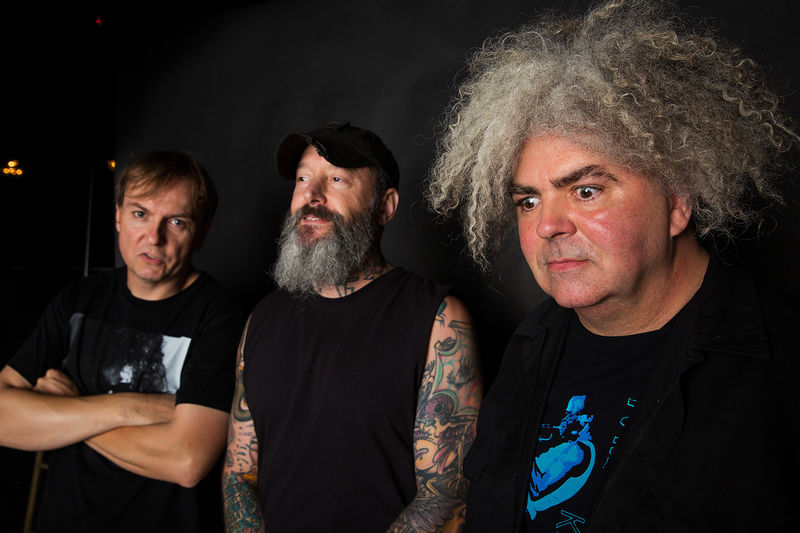 We’ve already celebrated the works of the mighty Neurosis, but the 20th anniversary of the band’s best album got us thinking about sludge metal in general, and the many incredible albums that have been released in the name of murky, menacing metal. This is just a short list of some of those albums, by no means exhaustive. But you should, absolutely, listen to these 10 records on your quest to consume all that is heavy. Enjoy our list of 10 Essential Sludge Metal Albums.

Eyehategod – Take As Needed For Pain

Southern sludge metal is a bit different from other forms of sludge, in that it’s a bit slower, murkier, darker and more fucked up. It’s also got a swing that few other regional forms can claim as their own. Eyehategod, who were weaned on the blues and R&B sounds of their native New Orleans, imbue their feedback-driven shriek on bleak masterpiece Take As Needed for Pain with a groove that’s unique to the Crescent City (see also: Crowbar, Down). But when Eyehategod get in the sludge, they also get comfortable in the caustic abrasion of it all, drawing out piercing feedback hums longer than humans are expected to sustain such ordeals. But the reward is in the darkly compelling sway and swirl of their acid-fried riffs, which don’t so much make the agony in Mike Williams’ lyrics more palatable but somehow make them feel all the more menacing.

“Sludge” and “grunge” are pretty much synonymous, at least outside the context of music, so it’d only make sense that there be some crossover between the two worlds. You could arguably make the case that Nirvana’s Bleach crosses over into some sludge territory, though it’s fairly decisively not a metal album. But The Melvins, Seattle’s heaviest band, are one of the most important bands in all of sludge history—and they just happened to benefit from all the attention afforded the burgeoning grunge scene in their backyard. They’re versatile enough to share a stage with either Mudhoney or Mastodon, and Houdini is proof of that, its pummeling, powerful chug showcasing both the band’s relentless heaviness and their knack for tuneful songwriting. Opening track “Hooch” is all slow-motion power chord chug, while “Honey Bucket” invites in some rollicking Motörhead gallop and “Lizzy” shows off the band’s bluesy side. It’s a smorgasbord of sludge, which just happens to pretty convincingly pass for a grunge album. – JT

Neurosis – Through Silver in Blood

Neurosis’ landmark fifth album took an already heavy sound and made it into something more expansive and soul-devouring than a mere fuzzbox aesthetic. Through Silver in Blood is more magma than sludge—it moves slowly and with lethal intensity, the Oakland metal outfit reaching their creative peak by turning each set of riffs into a grandiose dirge of seemingly immortal menace. Which isn’t to say it’s not fun to listen to; you have to clear out 70 minutes or so of your day to get to one proper listen of the album, but therein is one of metal’s most innovative masterpieces, a testament to searching beyond the template of doom and thrash and incorporating post-punk, dark ambient, a percussive tribal element and other dark and harrowing elements. Listen carefully and you’ll hear a heavy influence on albums by Isis or Mastodon, or well, just about any metal album of the last 20 years to some degree. But make no mistake—there is only one Neurosis.

Next to Neurosis, Isis is perhaps the most influential band in terms of taking sludge metal to elegant and epic new realms. Over time, their sound evolved into something that only partially resembled metal, but on Oceanic, the ratio is perfect. It’s part lengthy, unfolding post-rock landscapes and part meaty, Thor’s-hammer-heavy riffs. What makes “sludge” a slight misnomer (if only in perception) is how beautiful the album ultimately is. This isn’t the same stuff that comprises the rawness of early Melvins or Eyehategod—not exactly. It’s moving and spiritual, though there’s no doubt about how much it crushes. It’s a different shade of sludge.

Disciples of Isis and Neurosis in ambition if not in pure aesthetic, Mastodon took the deep, guttural riffs of those bands and paired them with hardcore and classic rock a la Thin Lizzy to turn out an entirely different form of sludge that swings rather than broods or churns. Leviathan is the band’s masterpiece (though there’s strong arguments for other albums of theirs), with a theme employing the concept behind Herman Melville’s Moby Dick. In fact, man versus nature is a pretty big theme in Mastodon’s albums, reaching its peak here, with an immortal opening line in “I think that someone is trying to kill me!” from “Blood and Thunder.” When Mastodon released this album in 2004, there were sludge albums kind of like it, but nothing with quite this level of riff-loving, hook-laden fun attached to such crushing sound.

If you want to talk about sludge metal, you can’t overlook hesher-for-life Matt Pike, who first conquered doom and stoner metal with Sleep before beefing up his riffs and speeding up the pace of his songs with High on Fire. Already a few albums deep into their career by 2005, High on Fire turned up the volume and the intensity with this extra beastly slice of sludgy destruction. There’s galloping ferocity with “Devilution” (and a nice pun for that matter), high-speed ass kicking in “Silver Back” and simply some of the best songwriting they’ve ever delivered in the title track. Add to that some of Matt Pike’s best guitar captured on record, and it’s a metal must-listen.

If you’re looking to split hairs, you could point out that YOB hews closer to doom metal than sludge, or at least they have on recent albums like Clearing the Path to Ascend. But the opening crunch-‘n’-shuffle of “Quantum Mystic,” from 2005’s The Unreal Never Lived is akin to slowed-down High on Fire, its murky, brawny low-end muscle clearing out every obstacle in its slow-moving, gloppy path. The four tracks that comprise the album are each monolithic beasts in their own right, with the nine-minute “Grasping Air” being the most concise of the bunch. The guitar tone that Mike Scheidt captures on the album is thick and noxious stuff, nearly impenetrable in its composition. And that, ultimately, is what makes this album a prime slice of essential sludge. However, the songwriting itself—particularly on the 20-minute “The Mental Tyrant”—transcends genre. It’s not simply essential sludge, but it’s definitely essential.

Over time, Baroness evolved away from the thunderous crunch of their debut album (and first couple of EPs) to something that’s more of a psychedelic hard rock sound with the heft of metal to give it that extra dose of thunder (though they’re all great, for the record). Red Album was Baroness’ first full length, and as such introduced them as an unconventional and innovative sort in a corner of metal that’s become known for sharp left turns and acid-laced diversions. “The Birthing” is as good as two-chord crunch gets, while “Wanderlust” finds them doing their best Iron Maiden guitar heroism over galloping, guttural syncopations and “Rays on Pinion” shows that they had epic songwriting in their blood from the early days. Baroness have since pursued more melody driven music on albums like their recent Purple, and they’ve never cared much for the term “sludge” anyway, but this might be their greatest pure metal album.

Minsk – The Ritual Fires of Abandonment

There’s no hard and fast rule that dictates a sludge metal band need only compose songs that span lengths no pop songwriter would touch. But it sure doesn’t hurt. Peoria, Illinois’ Minsk has a particular knack for making gargantuan tracks, and ones that aren’t just long in duration but big on ideas. Undoubtedly graduates with honors from the University of NeurIsis, Minsk find their abrasive groove and get comfortable in it, building up a ritual pyre of deep emotions before exploring farther reaches of their psychedelic sludge sound. While all their albums are pretty strong, including last year’s The Crash and the Draw, their best is this towering monument of torturous groove, a collection that finds a strange if happy medium between progressive ambition and melodic accessibility. – JT

In the years leading up to Kylesa’s recent hiatus, their style drifted well beyond the crusty riffs that marked their earliest, gnarliest material. Their sweet spot occurred somewhere in the middle, however, when their meaty riffs were paired with spiraling psychedelic elements and the urgency of post-hardcore. The band’s arguable best album (though there’s room for other nominations) is Spiral Shadow, which featured not just some of their heaviest sounds but their strongest songwriting. Leadoff track “Tired Climb” is a surprisingly catchy burst of acid crunch while “Cheating Synergy” finds guitarist Laura Pleasants fingertapping her way to glory. “Dust” is a doom-folk dirge worthy of Crazy Horse, “Back and Forth” is practically a punk song in its speed, and then there’s “Don’t Look Back,” which is maybe the most inspirational thing you’ll find across these 10 albums. That they put the brakes on their constantly evolving metal presence earlier this year is a definite bummer, but in releasing Spiral Shadow they left their impact with one hell of a psych-sludge odyssey. – JT