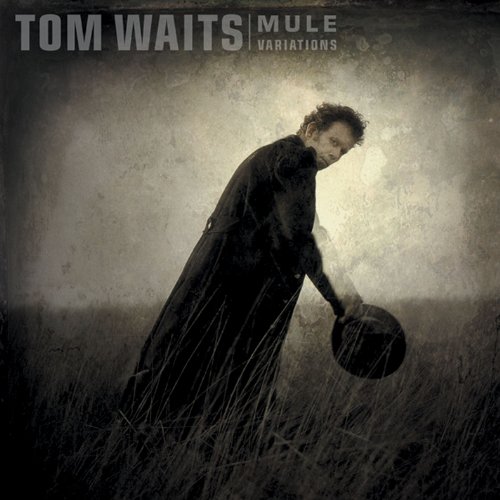 One of the most original musicians of our generation has been called everything from ‘junkyard poet’ to a ‘drunk white Louis Armstrong,’ that person being Tom Waits. What those descriptions fail to mention is that Waits delivers album after entertaining album and continues to improve with each successive outing. Sure, he’ll never release another Rain Dogs or Swordfishtrombones, and while newer releases share commonalities with those records, they also take the material to another level. Mule Variations is Waits’ first album of his third musical career phase. It starts his years with Anti, which continue to this day up to his latest release, Real Gone. With Mule Variations, Waits continued to push the boundaries of genre, combining literary themes with jazz and modern sounds. Plus, it just plain kicked ass.

“Big in Japan,” as the first song on the album, was a sure sign that this was not going to be a normal record. First of all, Waits recruits Les Claypool, the king of effed-up music, to play bass. Add some James Brown style horns to the mix and some fuzzed out percussion and vocals and it just gets weirder. The lyrics are some of Waits most straightforward and most tongue in cheek at the same time. It’s a look at the old ‘fame’ cliché of being ‘big’ outside of your home country. Take for instance two of Japan’s biggest pop idols over the past twenty years, Sesame Street‘s Bob McGrath (remember Bob?), and Jennifer Love Hewitt. While both of their respective careers were somewhat pigeonholed here in the States, in Japan they were huge. So Waits goes on to say “I’ve got this, but not that, but hey, I’m big in Japan!” Of course, I’m paraphrasing.

“Hold On” was another alternative radio hit for Tom. Sharing similarities with such favorites as “Tom Traubert’s Blues” and “Time,” the song proves that Waits can, over and over again, write consistently great tunes. “Get Behind the Mule” seems to be a tale of the value of hard work, but with Waits you just never know. He sings “You gotta get behind the mule in the morning and plow,” and to “Always keep a diamond (sapphire) in your mind.” He could mean that you need to work hard and to keep your eyes on the prize, but then again he might mean that sometimes you have to deal with a little bit of shit every once in a while and most of us do.

Waits recalls old Southern Blues classics, and even a little bit of a spiritual, with “Cold Water.” Waits always evokes mental images with his music. In the early phase of his career, you always somewhat envisioned seedy bars, diners, convertibles and dim streetlights. With the middle albums you could see New Orleans docks, shipyards, pirates and brigands. In his now third phase I picture more of a Gothic Southern town with old rotten barns and rusted out cars dotting the landscape. I picture creepers hanging from trees and chiggers waiting to drop. I can see fireflies dancing around in the humid night sky as the sounds of crickets and rocking chairs echo through the air. “Cold Water” is one of those songs that just make you feel like you’re in another place and time. Even though he may date the song with a mention of `Vietnam vets,’ you still get the sense you’re hearing the story from the mouth of an old-time hobo with a bindle on a stick, riding the rails and evading the law.

My favorite song on Mule Variations isn’t really a song at all. It’s one of his spoken word pieces like “9th and Hennepin” called “What’s He Building?” Waits plays the role of the inquisitive neighbor wondering what the guy next door is building. He observes, hears, and gossips his way through, but never really answering what it is that the neighbor is doing. I love this track for three reasons. The first is it’s simply aesthetically cool. I love the fact that he just goes on and on with his observations and nosiness, constantly repeating, “What’s he building in there?” Secondly, it’s a great indictment on privacy issues. It’s like a Twilight Zone episode, but in this instance we don’t get to see the narrator’s comeuppance for his prying, but taking the idea a bit further, with recent events it takes on a new meaning with what is going on in Iraq. Think about it. The last line, “We have a right to know,” to me is meant to be a hollow argument. Thirdly, it reminds me of the story structure of Thomas Pynchon’s The Crying of Lot 49. I love how the book is a ‘reverse mystery,’ meaning that traditional mysteries start with a lot of disassociative clues which must be brought together as a whole, narrowing their scope, in order to concisely find one solution. Instead, Pynchon’s novel takes one particular clue and as the `protagonist’ investigates, the scope becomes overblown, ever widening rather than narrowing, until he can’t even see the picture clearly. The inner artwork of the CD even has the same bugle symbol used in the book, falling out of a scarecrow-like Waits torso.

“Black Market Baby” finds Waits in a David Lynch type atmosphere. The sounds of the Chamberlain and congas, played slow and note-by-note, beat-by-beat hypnotize the listener, maybe to a place with red curtains and black-and-white checked floors with backwards talking midgets! Or maybe it’s just a laid back slow jazz / blues number. “Eyeball Kid” is a fictional retelling of Tom Waits’ own childhood. He says that a set of parents wanted “a showbiz child.” So he says that:

Possibly the only thing that Waits actually shares in common with the “Eyeball Kid” is the same birthday, but we hope that there’s other truths within, mainly because it would add to the myth. Waits’ wife and partner Kathleen Brennan co-wrote quite a few of the songs on the album including the beautiful “Picture in a Frame.” That song and “Hold On” are two of the sweetest songs on the record, and they help to balance out the ‘weird’ ones. She also cowrote “Georgia Lee,” a song which represents another style of song for Waits, that of the ‘portrait of truth’ genre. A song he wrote for the film Dead Man Walking called “Fall of Troy” fits into that category as well. In these songs, he depicts a real life situation, usually taken from the news, and writes a song around it, almost always touching and affecting.

There are other great songs on the album that I haven’t mentioned, like closer “Come On Up to The House,” but I’ve got to stop somewhere. What I’m trying to say here is that Mule Variations is a true testament to the fact that turning fifty doesn’t mean you have to roll over and play dead. Tom Waits proves that he can continue to change, adapt, and experiment to create Truly Great music. Waits released seven albums with Asylum and seven with Island. He’s released four so far with Anti. If he matches his former pars, I will collect the next three with glee, but I hope he continues to challenge himself and his listeners and maybe go for another seven after that.