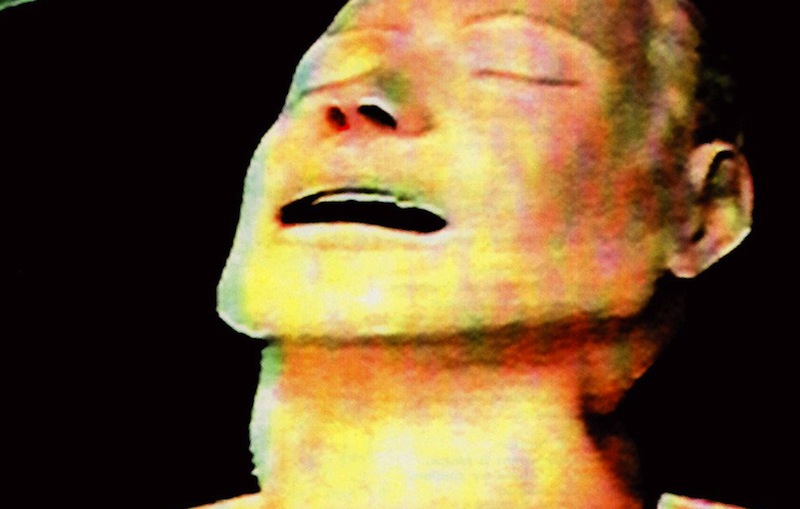 The art of album sequencing is an ephemeral thing. It’s hard enough figuring out the strongest way to begin an album, but determining the proper way to wrap it up is equally important. A great LP can ride out any number of ways—with a slow and somber farewell, on a powerful epic, or—as we prefer it—with a bang. While it’s not necessarily common to hear an album come to a close with its most climactic or loudest track, some of our favorite records do just that. This week, we select 10 of our favorite exclamation marks punctuating great albums. Read about and listen to these 10 intense album-closing tracks from artists who decided it’s better to burn up than fade out.

The draping suite that closes the Beatles’ most eminent album is the musical equivalent of a British psychological thriller. John Lennon, understated and possibly a little medicated, recounts horrific daily news items with weary apathy while Ringo Starr’s drums stumble drunkenly into the kitchen. Without much warning a pert Paul McCartney enters to describe his morning wake-up activity, which goes as scheduled until he’s whisked “into a dream.” John then returns to discuss pending road improvements that have forced city planners in Blackburn, Lancashire to hire additional surveyors. There are also two atonal orchestral swells that give voice to the crawling anxiety that percolates beneath the seasoned lie of British normalcy. Three pianos and a harmonium then provide the crashing finality which takes a whole 40 seconds to fade out, before the Beatles send a final, secret message to freak out your dog, showing that the most popular band of all time were really intent on expanding their audience. – Paul Pearson

The Swindon chameleons found their commercial footing on their third full-length, thanks to Colin Moulding’s hit “Making Plans for Nigel” and Andy Partridge’s impertinent pop charm in songs such as “Real by Reel” and “Scissor Man.” But the final track on Drums and Wires is the most deranged song XTC ever put out. It starts very quietly as Partridge considers the futility of self-determination over a reserved organ staccato: “Does it really matter where I put my finger? Someone else will come along and move it.” Piece by piece the rest of the band comes in, with Partridge bringing others under the shadow of his cynicism until the bridge, when he has his own version of the Roger Daltrey scream at the climax of “Won’t Get Fooled Again”: “It’s just a complicated GAAAAAME!” From there on it’s just Partridge’s own primal scream session for the rest of the way, carrying on long after the band’s left the room and he’s shrieking for his own personal entertainment. It’s a blinded, crazy portrait of rage most metal bands would trade their accountants for. – Paul Pearson

Intensity can be measured in a number of ways, from a quiet, slow burning kind of eeriness to a more direct, visceral assault. The final track on Mission of Burma’s Vs. is clearly the latter, the most straightforward punk song on an album full of taut, muscular post-punk that stretched and reconstructed the genre’s already loose stylistic markers. Clint Conley’s lyric has a sense of urgency about it as well, detailing an open-ended situation that echoes the complicated nature of figuring out one’s place in the world and entering adulthood. The rapidly intensifying nature of the song makes that uncertainty feel all the more stressful, but the kickass power-chord progression turns that tension into two of the most exhilarating minutes of the band’s career. – Jeff Terich

With the squeal of feedback, splash of rain and crack of thunder that opens this album-ending symphony of destruction, “Raining Blood” signals from its very first sounds that the listener is set to undergo a menacing ride through the deepest caverns of Hell. “Raining Blood” is, much like the nine songs that precede it on Slayer’s career-defining 1986 masterpiece Reign in Blood, one blisteringly furious track. Yet it pushes the extreme just that much more, Kerry King and Jeff Hanneman’s guitar riffs racing against Dave Lombardo’s drums in what feels like a struggle to see who’ll give first. It’s a song on the brink of a total meltdown, which happens just before the four-minute mark, back to the thunder and downpour that opens this apocalyptic moshpit. – Jeff Terich

The myths about Slint’s Spiderland are every bit as intense as the album itself, with urban legends about the process of making the album ending in at least one member checking into a mental health facility. The truth is perhaps much more mundane, though that doesn’t take anything away from the eerie chill of the album itself, particularly its haunting and haunted final track. Balancing verses lifted from “Rime of the Ancient Mariner” with taut post-hardcore guitar riffs, “Good Morning, Captain” is the indie rock equivalent of seeing a ghost ship emerge from a dark, dank mist. It’s constantly on the brink of horror and mayhem, but it’s not until the final section that it ever gets there, with a rise in distortion and a ferocious cry from vocalist Brian McMahon. “I miss you” never sounded so desperate and unhinged. – Jeff Terich

from The Downward Spiral (1994; Nothing/Interscope)

Nine Inch Nails’ classic industrial passion play The Downward Spiral is the sound of someone—ostensibly frontman Trent Reznor—succumbing to demons both internal and external. If opening track “Mr. Self Destruct” represents him starting to be chewed up by his infernal machine, “Hurt” is the sound of whatever remains being excreted, seeping away into nothingness. It’s a sad, bitter suicide note of a song, an ode to not appreciating someone until they’re gone. An avatar for the sudden soft/loud transitions endemic to ’90s alt-rock arrangements as well as a callback to the pulled-out finale of The Beatles’ “A Day in the Life,” it’s a sudden rise in dramatic balladry and poetics that Reznor had previously suggested as far back as “Something I Can Never Have.” – Adam Blyweiss

The last track off of the already intense 1995 breakthrough album The Bends, “Street Spirit” feels relatively unassuming at first. It’s only after Jonny Greenwood’s arpeggiated guitar work begins to work its magic that the haunting and creeping intensity of the song begins to take shape. Alchemists of sound at heart, Radiohead prove this is what they do best, taking sounds in primitive forms and escalating them into something else entirely. It’s a bleak, keyboard-strangled track that revises its own harmonies into bitter, evocative essences that are recalled and reworked with each movement until ending with a sudden stop. It’s always the ending that makes this song what it is, harrowing, intense and utterly lonely. – Brian Roesler

from Ladies and Gentlemen We Are Floating In Space (1997; Dedicated/Arista)

Few albums present themselves with as much curiosity and self determination as Spiritualized’s 1997 masterpiece Ladies and Gentleman We Are Floating In Space. Frontman Jason Pierce’s vision had never been as clear following the two-year recording period, surpassing any plausible boundaries of space rock and neo-psychedelia. But perhaps the most impressive part of Ladies and Gentlemen We Are Floating In Space is the closer, “Cop Shoot Cop,” a 17-minute epic paraphrasing a John Prine lyric: “Jesus Christ died for nothing, I suppose.” Although copied, this lyric captures the eerie remnants of addiction, greed and murder, a bundle of human extremities and sin that are found all through out Ladies And Gentlemen. Its gentle opening composition, a relaxed acoustic lick, a swirling, muffled bassline and a variety of disjointed keyboard slams give a glimpse of Pierces vision, clearer than ever, ready to explode at any minute. Pierce’s psych-rock influences come in spurts, and the 17-minute runtime feels as if the majority of these off-kilter jams were actually improvised. “Cop Shoot Cop” is the ideal album closer, a song that captures every single facet of the absurd intensity that makes up this album, and there is still nothing quite like it. – Timothy Michalik

Every Converge song is pretty damn intense, so it’s not like their album closers are going to be any different. That being said, “Jane Doe” is in a class unto itself. Their longest track, “Jane Doe” spans for a breathtaking 11 minutes as the band sprawls from abrasive, sludgy hardcore to a transcendent, heroic shoegaze chorus that represents one of the most beautiful moments in Converge’s catalog. Yet whether in its most grungy moments or its graceful ones, “Jane Doe” feels like the tipping point of something massive—the final step before some great leap. It’s 11 minutes of surging adrenaline, and every moment is one to savor. – Jeff Terich

Possessing a borderline parodic version of Beethoven’s “Ode to Joy” as part of its main composition, it would be hard to argue that any other Bright Eyes song found its lyrics etched into quite so many high school notebooks across the country. There’s a lot of gems throughout that perfectly encompass the themes of the album entirely, such as “my parents they have their religion/ but sleep in separate houses” or “my mind races with all my longings/ but can’t keep up with what I got.” But it’s a single line, “lets fuck it up boys, let’s make some noise” that ends up recalling both the melody of the song and leading to the title of the album. Leading into a chaotic, noise-filled rant that cascades into a horn led glory of anxious mania. It is intense, cathartic, and quintessential emotional overload. – Brian Roesler