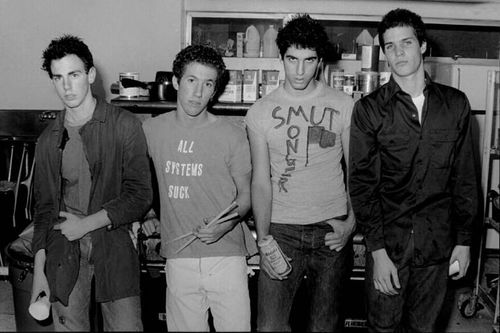 There was a time, back when I was about 13 or 14 or so, when I would unequivocally call Bad Religion my favorite band. I wore the t-shirt, I spun Recipe for Hate more times than I can count, and I could probably recite the entirety of “21st Century Digital Boy” if I needed to. Note the timeframe, because it’s important — I’m not sure if any studies or research projects have been conducted on teenagers and musical taste, but adolescence at least in theory seems like the optimal time to be exposed to punk rock. You begin to develop your own sense of independence, develop a healthy distrust of authority, and need an outlet to channel all the hormonally driven frustration that plagues you and makes your life as awkward as humanly possible. Punk rock is music that spoke to teenage angst back in the 1980s, and still does. And you can bet your sweet liberty spikes that where there are teenagers and Stratocaster knock-offs, a new punk band will be born.

In junior high, I had friends who just plain wouldn’t listen to anything if it wasn’t punk. That changed in the course of a year or two, but at 14? Forget it. Not punk? Not getting played. I can’t say I was the same way, really, because I would come to discover that post-hardcore spoke to me a lot more than SoCal punk did, and even then, I liked bands like Quicksand a lot more than NOFX. But Bad Religion spoke to me in a way that bands like Pennywise didn’t, perhaps because Bad Religion had a stronger grasp on melody, or maybe because Greg Graffin’s impossibly complicated lyrics on human evolution and sociology made me feel smart. More importantly, Bad Religion was a common interest between me and my punk-snob skate-rat friends. But if I ever played the band’s second album Into the Unknown in front of them, I can only conceive of one possible reaction: “What the fuck is this shit?”

I actually didn’t hear the album until much later — out of morbid curiosity — and thus I wasn’t really aware of its reputation, but I’ll summarize it for you based on the conventional wisdom: It’s the one that sucks. More accurately, it’s the Bad Religion album that doesn’t sound like a Bad Religion album. On its face, that’s not necessarily a bad thing. Bad Religion has a lot of albums, and after a while they start to sound pretty familiar. Some of them — Suffer, Against the Grain and No Control in particular — are regarded as punk rock classics and for good reason. They’re raw documents of a band at their hungriest and angriest, and while they’d come to be one of the most successful mainstream punk bands of the ’90s, in the ’80s, they were icons of the underground. 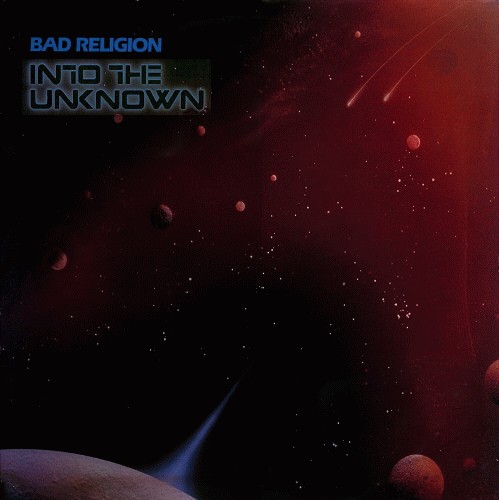 Into the Unknown, however, is a dorky prog album. In principle, that would be enough to make some fans give it the gas face. Time and time again music journalists have noted that punk was a reaction to the excesses of the ’70s, and on Into the Unknown, Bad Religion more or less is saying, “You know what? Excess is pretty fuckin’ sweet.” And boy, is there some excess here. Just about every song is loaded with laser-beam synthesizer, and it sounds pretty much nothing like Bad Religion as we know it. Electric Light Orchestra, or Yes, or Genesis? Absolutely.  And the 12-string acoustic riffs on “Time and Disregard” even sound a little like Jimmy Page, which is actually sort of awesome — but then the synths come in again and take the listener on a seemingly unending ride through Disney’s Space Mountain.

Despite how bizarre the album seems in context of the band’s discography, however, it’s actually not that bad of an album. It’s not a great album, though, and plenty of things get in the way of making it so. Greg Graffin’s vocals, for instance, lack the histrionics necessary to sell the Todd Rundgren’s Utopia-style arrangements. And as someone who loves me some synthesizer, they can definitely ease back on a lot of it here. But there’s still plenty of enjoyable material on Into the Unknown — you just have to embrace how ridiculous some of it is. The sci-fi rock ‘n’ roll space launches of “It’s Only Over When…” and “Losing Generation” are geeky fun, and highly catchy at that.

The story behind Into the Unknown goes that the intense backlash against the album briefly caused Bad Religion to break up, and they’ve been hesitant to talk about it since. And that’s understandable; nobody wants to thumb through pictures of themselves at their most embarrassing. But really, the Bad Religion Into the Unknown lore is a lot more notorious than its actual sound, which is perfectly fine, if not amazing. Besides, the band just released a Christmas album. At this point, I’m not sure giving a shit is really worth the effort anymore.