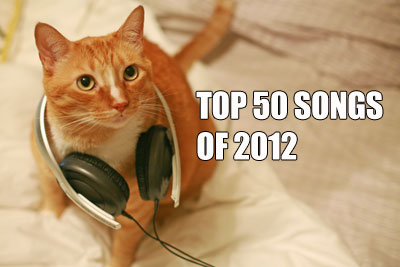 10. Converge – “Aimless Arrow” (Epitaph)
[from All We Love We Leave Behind] Buy at iTunes

The best pop songs of the 2012 have nothing on the melodic clatter that drenched the opening track of Converge’s All We Love We Leave Behind. The rapid-fire drums, the colliding guitars, the insane time signatures — all Converge trademarks at their best. But “Aimless Arrow”‘s true assault stems from Jacob Bannon’s lethal screams of intensi…oh wait…he sings on this song? Holy shit. His pipes add an almost emo-like element to the band’s usual chaos, but diehards needn’t worry that they’ve gone soft on us. All hell breaks loose by the song’s end (and the tunes following it on the LP represent the band at their most brutal). The song is a display of a band unafraid to experiment with hardcore’s sometimes close-minded conventions, and it also solidifies Converge as America’s most-crucial hardcore band. – Rick Moslen

Aside from its breakneck pace, epic nine-minute duration and flawless shredding, “Wasted Days” succeeds in many ways because of its bleak but relatable context. The song exudes angst, frustration and desperation; but unlike the similarly pissed-off jams of the `90s, Cloud Nothings assume and even embrace culpability for the present situation. “I thought/ I would/ be more/ than this” is one of the most brutally honest lyrics of the year, but despite that, there’s something deeply paradoxical about an artist proclaiming to never get anything done on such an amazing album. Recording “Wasted Days” was ironically one of the most productive things any artist did all year. – Donny Giovannini

8. Chromatics – “Back From the Grave” (Italians Do It Better)
[Single; from Kill For Love] Buy at iTunes

Chromatics maintain a conspicuous line between their pop songs and their longer, instrumental mood pieces. It’s not entirely opaque, nor unbreakable, but it’s there. And yet, “Back From the Grave,” the most explicitly “pop” moment on their sprawling Kill For Love, is spectral in a way as to flirt with the idea of floating off into ambience were, suddenly, the drums to give out. Chromatics do texture and mood better than most, but singer Ruth Radelet in particular seems to embody a particularly ghostly presence. So where “Kill For Love” might hit with a slightly heavier impact, “Back From the Grave” is a dangerously sly seduction. So, don’t let the name fool you — this song isn’t a gory zombie tale, just a spectral form materializing and stepping into the light. – Jeff Terich

The Apache-beat that begins and runs through “Brains” quite clearly signifies KRAUTROCK. If that beat didn’t have so many unpredictable lives behind and ahead of it, then that would be the end of the story. It’s a paradox of sorts: the Apache-beat leads places but whoever sets it off has to lead it somewhere worth being taken to. “Brains without names,” as Jana Hunter sings a few times, are required to make that happen. “Brains” works as a song, if you turn your ear toward the lyrics and the structure, but it works as well as a single-track psych-out, the human voice just one more sound amid the ambient swells, the song’s ebb and flow, words losing their sense and becoming objects of the senses. “Brains” may well be a musical nootropic, but whatever clandestine intelligence it aims to activate remains remote at the borders of conscious thought. – Tyler Parks

If there’s one thing the Dirty Projectors have proven in 2012, it’s just how much they can do with so little. True, the band has built quite a reputation based on their often fussy arrangements, but “Gun Has No Trigger” is as effective as anything they’ve released to date and it centers around nothing more than drums, bass and those perfect vocals. It just goes to show where the band’s two truest strengths lie — their voices coupled with their gift for melody. This is not to begrudge the band’s virtuosity by any means; it remains a weapon in and of itself (just listen to that bass groove). But there’s something so powerful about Amber Coffman and Haley Dekle’s ability to push listeners to the brink with nothing more than their “ooohs”. Of course, it doesn’t hurt that “Gun” also happens to be one of Dave Longstreth’s most commanding compositions. – Chris Karman

Intricacy in its own right isn’t too special. Any artist can slap a few more layers on a song — an effect here, a fancy chime there, etc. Grizzly Bear, however, adroitly craft complex rhythms that never feel artificial or forced; any and every sound colors the piece and moves it towards the next sequence. “Yet Again” is the perfect example of the band’s sonic sapience. The track starts with Ed Droste’s cool vocals and continues forward with familiar, yet exciting guitar and piano work that continuously evolves and folds back on itself, delivering an unexpected but welcome climax of psychedelia during the song’s final 50 seconds. As with most tracks on Shields, Grizzly Bear covers a formidable and varied landscape with the ease, grace and confidence to set them apart from even their most talented indie peers. – Donny Giovannini

To call Death Grips’ manic, shirtless emcee Stefan Burnett a rapper isn’t entirely accurate. He mostly shouts rhymes at full volume, his ripped, sinewy presence far more intimidating than the baddest gangster in the game. It’s all too appropriate, then, that he’s at his best when pushing that menacing approach to uncomfortable boundaries as he does on “Hacker,” the unconventionally catchy beat-down that closes out Death Grips first and last major label release, The Money Store. The beats and synths play out a laser tag match while Burnett celebrates an itinerary of chaos: “Throw up a black hole at the entrance of Linens `n’ Things“; “You’ll catch a jpeg to the head“; “The table’s flipped, now we got all the coconuts, bitch.” It’s a sociopath’s handbook of notable quotables, or 4chan set to Alec Empire beats. Death Grips may be laughing with their audience when Burnett taunts, “I’m in your area!“, but I wouldn’t push `em. – Jeff Terich

Roughly 100 percent of what Japandroids does isn’t terribly innovative or epoch-making. And yet with each new song they dazzle us still with near-revelatory force. The dynamics of songs like “Wet Hair” or “Sovereignty” return intact on “The House That Heaven Built,” only in a much larger scope. What was meant for one person on Post-Nothing is now meant for the masses, the more unwashed the better. It is the latest in the tradition of “we’re all in this together so let’s build a better world and have a few beers later” rock and folk, the tradition of Springsteen as well as Guthrie, only infused with reckless youth and more implicit than explicit populist sentiments. FDR would probably not have liked Japandroids, but nonetheless would have found some political gain in their music. – Chris Morgan

I made pretty clear in my review of Visions, early this year, that I didn’t exactly know how to take Grimes’ genre-mashing glitch-pop. Some sounds take a while to get under your skin, but after letting Grimes sink in, Visions wound up being one of my favorite albums of 2012. That being said, some tracks stand out more than others, and “Oblivion” is one of the strongest stand-alone offerings from Visions. Opening with a bubbly synth line, the track soon flowers into Grimes’ signature production flourishes, layering vocal tracks to construct a dreamy, sensual pool of sound. This aesthetic is deeply satisfying, but “Oblivion” doesn’t truly take off until around 2:22, when the sound cools down for a second to make room for a synth-run that heavily channels Radiohead, roaring in the most gentle, yet obtrusive manner. As Claire Boucher swoons “See you on a dark night,” samples and synths circle that single, repeated groove, until fading into silence. “Oblivion” is artful and dark, while still remaining timely and fun. I can’t imagine what Grimes might come up with once she graduates from GarageBand. – A.T. Bossenger

Two decades ago, Chuck D of Public Enemy famously called rap “the black CNN.” If that remains the case — at least the ideal of that, the smart delivery of news and insight — then this song from Channel Orange could be a week’s worth of Pulitzer-, Emmy-, or Murrow-winning specials hosted by Anderson Cooper. It’s been a long time since we’ve heard in hip-hop and R&B this level of powerful storytelling and issue-raising. Frank Ocean’s major-label bow is a crash course in dropping smooth science; his setting of scenes and describing of fine details mesmerizes listeners on a set of songs ultimately about emptiness and dissatisfaction, whether you’re hanging out with rich friends, fucking groupies or mourning unrequited love.

“Pyramids” hearkens back to PE’s own “Night of the Living Baseheads,” a high peak of dramatic reality amid the critiques and fantasies laid out on It Takes a Nation of Millions to Hold Us Back. Where Chuck D laid out the harsh results of unchecked drug use, Ocean outlines the path of a Las Vegas prostitute between pimp and john — and if that weren’t dark and seedy on its own, the customer might even be the girl’s ex-boyfriend. It’s enough to make you want to go HAM a la Nicolas Cage, and that’s just in the song’s second half. We’re led into it by a passion play involving Egyptian queen Cleopatra, a pulsating pursuit that traces the legacy of broken promises and deception’s defeat of love from her Africa into the American Southwest. I don’t know what black music’s last true epic was — “Maggot Brain”? “Thriller”? — but I know Frank Ocean has made the next one. – Adam Blyweiss