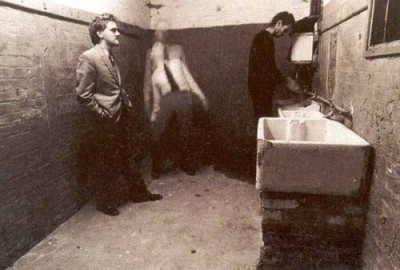 Halloween is almost here, so it seems like an appropriate time to round up a list of some of the most disturbing, unsettling and just outright frightening albums ever made. Put these on at your Halloween party and your guests might run away in terror. Or, perhaps, you might get some unexpected and uninvited guests joining you without warning. Either way, if your October isn’t feeling creepy enough just yet, put any of these terrifying albums on and, once their menacing melodies worm their way into your head, you’ll be certain to wake up in a cold sweat. Listen… if you dare.

A six-foot-tall German nihilist and short-term member of the Velvet Underground, Nico is, by default, a sort of intimidating figure. But on The Velvet Underground & Nico and Chelsea Girl, she still had an atypically magnetic charm about her. On The Marble Index, however, she stands at the center of a bleak and disorienting swirl of gothic harmonium drones and just plain out there sounds, most of which are provided by onetime bandmate and fellow aficionado of the abstract and weird, John Cale. “Lawns of Dawn,” when its parts are separated, might not seem so ominous. But when its ethereal windchimes, wheezing harmonium, nebulous synth tones and distorted background screech (okay, that’s pretty disturbing on its own) come together beneath Nico’s sea shanty-like vocal melody, it adds up to something you’d never want to hear with the lights out. Even more intense still is “Facing the Wind,” which sets a weirdly jaunty piano against the ever-present harmonium drones, whose erratic changes in volume mimic the effect of wind blowing through a haunted woods, while the arrhythmic percussion is just plain wrong, described by different critics and listeners as everything from the sound of someone rapping on a coffin lid to that of being buried alive.

UK post-punk trio This Heat laid down their share of cool, Krautrock-inspired grooves in their day, notably on epic single “Health and Efficiency,” as well as a handful of the more accessible moments on groundbreaking second album Deceit. But while a slightly off-kilter lullaby like “Sleep” and a punk rocker like “S.P.Q.R.” can lull the listener into a false sense of security, much of the very same album creates a menacing and disorienting atmosphere that’s consistently intriguing and perpetually alarming. “Independence” sets the text of the Declaration of Independence against a darkly moody post-punk backdrop, “Paper Hats” descends into a fierce stew of dissonance and screaming, and the chanting that opens up “A New Kind of Water” is like a cult ritual. Yet sometimes the band is at their creepiest when most melodic, as on “Cenotaph,” the melody of which is simply eerie. And then there’s “Radio Prague,” a humming, tapping tape-music nightmare of disembodied voices cutting in and out, and “Hi Baku Shyo,” a post-apocalyptic mixture of sounds and atmosphere that makes the world seem like a much lonelier, more disturbing place.

Oh boy, Nurse With Wound. Where should I start? Perhaps I should mention the erratic clang of cymbals that run throughout the duration of Homotopy to Marie. Then there’s the militant marching at the opening of “The Schmurz.” Add to that the little girl complaining of a funny smell, the moans of agony, sometimes with added effects to sound just that scarier, as well as the low ambient drones. The ghostly and unexpected old-time piano samples only deepen the atmosphere of inexplicable terror. The sudden swells of cacophonous howling and piercing shrieks make it turn violent. And the crunching metallic noises that open the record serve as a merciless bludgeon. I could go on, but the gist is that Homotopy to Marie is one of the weirdest, most terrifying recordings ever produced.

John Balance had a reputation for making some truly bizarre and troubling sounds in his lifetime, and Horse Rotorvator is perhaps the best showcase of the broadest of his creepy musical palette. A bridge between the abstract industrial of Einsturzende Neubauten or Nurse With Wound with the more accessible acts like Ministry or Nine Inch Nails (whose Trent Reznor was massively influenced by Balance), Horse Rotorvator presents its fright factor early with its title, which describes a farming tool made of a horse’s skull, used to till the earth after Armageddon. Ok then! Fun stuff. But then there’s the music, which runs from tuneful haunts such as “Slur” (featuring guest vocals by Soft Cell’s Marc Almond), to carnivalesque hallucinations as “Circles of Mania” and the ambient descent into hell, “Blood from the Air.” Even when the melodies approach anything resembling pop music, nothing feels safe here.

As a general rule, just about everything Swans does is some pretty freaky stuff, from their early, noisy, scream-filled bloodlettings, to their later experiments with drone and found sound. Somewhere in the middle of these extremes is Children of God, a more melodic but nonetheless ominous affair that runs the gamut from vicious, terrifying scream-fests (“Beautiful Child“), to super ominous and slow moving epics (“Blind Love”), to even some quite beautiful moments (“In My Garden”). Pretty much anytime you pair an unhinged frontman like Michael Gira with an otherworldly singer like Jarboe, you’re going to get something pretty disturbing, and Children of God doesn’t disappoint on that front. But if you make it through the first 12 tracks without jumping out of your seat or breaking a sweat (which is a good possibility), you’ll be rewarded with the closing title track, a stunning but deeply troubling dirge into the underworld.

Use of one’s music in multiple David Lynch projects isn’t necessary to make it creepy, but it definitely helps. Julee Cruise first garnered attention for her song “Mysteries of Love,” which was used in Lynch’s Blue Velvet, and subsequently for “Falling,” which was also the theme for Lynch’s Twin Peaks. So, on her first full-length album, Cruise, with the aid of Lynch and composer Angelo Badalmenti, made an ethereal and retro-leaning set of music that’s pretty, gentle, but consistently unsettling. Something about Badalmenti’s use of reverb, tremolo guitar effects and Cruise’s distant, paper thin vocals gives the entire album a paranormal quality. And the occasional exclamatory movement, like the unexpected swell of strings in “Into the Night,” can actually cause a bit of a startle. Yet, Floating Into the Night resembles nothing as a musical equivalent to the vanishing hitchhiker legend. As its ten songs come to an end, you can’t help but wonder: were they ever actually playing in the first place?

The Conet Project is not so much an album of songs as it is a four-plus-hour archive of field recordings from shortwave radio transmission. Many of them are actually recordings from spy stations during World War II, and the decaying, static-ridden condition of the sounds contained therein results in a creepy experience through and through. Some of these tracks have been sampled by the likes of Stereolab and Wilco (the repetition of “yankee… hotel… foxtrot” should sound familiar to some), but without the added melodic accompaniment, these recordings are eerie at their tamest, and downright apocalyptic sounding at their most intense. The juxtaposition of ice-cream truck music against counting in Swedish on “The Swedish Rhapsody” is creepy enough, but in the final minute, the recording warbles a bit, and the once detached voice briefly grows more horrific. “Gong Station/Chimes” is disturbing in its stark, distorted melody. And “The Backwards Music Station”… well, it just might be the most frightening thing you’ll ever hear. And it’s all available online for free, so download these terrifying sounds and go to town.

In the 1960s, Scott Walker released some of the greatest orchestral pop records ever pressed to vinyl on his run from Scott to Scott 4. But after that, he grew ever more eccentric and reclusive, reappearing once every decade or so with a record far weirder than anything he had ever done before. This pattern reached a jaw-dropping climax with The Drift, a lengthy and dissonant piece of art that falls somewhere between the modern classical pieces of Krzystof Penderecki and Gyorgi Lygeti, and the terrifying post-punk of Swans. It’s not an easy listen, though it is a breathtaking one. Each song is a majestic piece of harrowing orchestration and unsettling imagery, from “Jesse,” which is a fictional account of Elvis Presley’s stillborn brother, to “Clara,” which was inspired by September 11th. At one point Walker pounds a side of beef as percussion. It’s a work of highly troubling genius.

Portishead’s music, though certainly eerie in an accessible, ethereal sense, never really approached anything truly scary. That is, until they released Third. Doing away almost entirely with the idea of “trip-hop,” sonic mastermind Geoff Barrow began pursuing darker, denser psychedelic sounds, inspired heavily by the Silver Apples. But his take on throbbing, pulsing psych is considerably more disturbing. Amid a handful of prettier tunes, such as single “The Rip,” the group primarily set their compass to uglier, more abrasive textures which, ironically, comprise a stunningly beautiful, if often terrifying whole. A voice in Portuguese begins the album with an ominous warning that translates to “Beware the number three.” The atmospheric “Small” erupts into a trip through hell via hallucinogens. And closing track “Threads” fades out, leaving only a repetitive moan of an evil synthesizer that seems to mimic the breath of Satan himself. This may be a great pop album in parts, but it can play some pretty mean tricks on your mind as well.

I’ve never considered much metal to be all that scary, though the storm sound effects in “Raining Blood” are certainly ominous, as well as the general vibe of more of the depressive, lo-fi black metal. But Georgia sludge metal outfit Harvey Milk, who actually have a pretty great sense of humor, managed to create the bleakest, most gut-wrenching nightmare of a metal album possible on A Small Turn of Human Kindness. It’s not an immediate fright, simply because it’s a slow moving churn of a thing, but as the plot thickens, and the darkness harbored by its two central figures becomes clearer, there’s a moment of harrowing clarity that puts the whole thing into terrifying perspective. That songs like “I Alone Got Up and Left” manage to incorporate some pretty intense sounds into the mix just makes it that much more powerful.