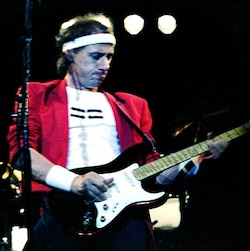 Wearer of many hats, Knopfler is not only a guitarist, but also a record producer, film score composer, singer and songwriter. An impressive performer on his own, he has also joined the stage with artists including Elton John, Bob Dylan, James Taylor, and Sting. Known best as lead guitarist for Dire Straits, Knopfler’s solos are so impressive and intricate that listening to them can leave the listener a bit exhausted themselves. With four Grammys under his belt, and three (!) honorary doctorate degrees in music, it’s safe to say that Knopfler is pretty well rounded, not just as a guitarist but a musician. – VC 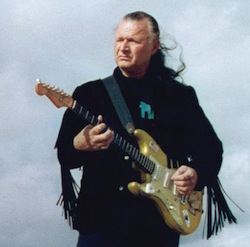 “Oh how he can pluck a string/Oh how he makes you sing/Listen, listen to the king,” implores the all-female chorus on 1963’s “King of the Surf Guitar.” There’s no muddled history in the surf rock genre; Dick Dale is truly the king. Unparalleled by imitators and rip-offs alike, he was responsible for pioneering an entirely unique genre in rock music during the early 1960s. Shredding through licks of crunched, ear-splitting breaks of staccato distortion, Dale’s proto-punk aptitude introduced widespread audiences to inescapable hooks and a heralding musical style. A harbinger of many of the guitarists on this list, Dick Dale’s realm of influence is bafflingly extensive, as the king’s successors are indebted to his pivotal experimentation with performance technique, electric amplification, and melodic framework. – PPilch

Air guitar moment: The pipeline riffs stretching into space on “Riders in the Sky.” 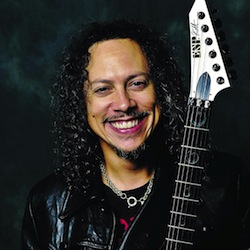 Even when Metallica has produced outright awful material—looking at you, Load, Reload and most of St. Anger—the axe work of Kirk Hammett has never been less than stellar. His arrangements contain multitudes, melodies and harmonics at war with one another, riffs corrosive enough to cut through glass stacked 10 miles high. The solo freakouts on everything from “For Whom The Bell Tolls” (*goes on endless fucking list*) to instrumental nightmares like “The Call of Ktulu” and underrated oddities like their cover of Nick Cave’s “Loverman” are what drag us in, for sure. But it’s his mastery of song construction and dynamics—especially soft-loud, which we often act as if the Pixies and Nirvana invented—that gives Metallica’s best work its backbone. – LG 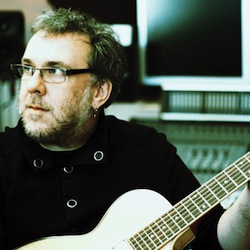 Scotland’s Cocteau Twins took their name from a Simple Minds song, the name not any specific reference to anyone in the band. It’s easy to make that mistake, though, considering their signature sound is a combination of Elizabeth Fraser’s otherworldly vocals alongside the gorgeous layers of Robin Guthrie’s guitars. In their darker goth-rock years, Guthrie relied more on ominously noisy effects, treating highlights like “Wax and Wane” with a more confrontational cacophony. As Cocteau Twins evolved into the dream pop grandeur of later albums such as 1990’s Heaven or Las Vegas, however, so did the expanse of Guthrie’s fretboard, emanating a swirl of joy and melancholy that seemed too beautiful to be human, and too delicate to be so powerful. – JT 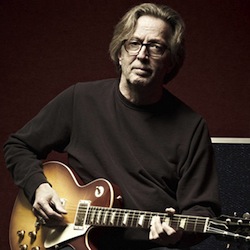 To twist and focus that Makepeace quote you remember from The Crow, Eric Clapton is the name for God in the lips and hearts of other guitarists. The man has spent more than 50 years repping for jammy psychedelia, fluid AOR, traditional blues and world-weary singer-songwriter pop. We can get some measure of Slowhand’s influence through his partnerships—a member of The Yardbirds, John Mayall & The Bluesbreakers, Cream, Blind Faith, and Derek and the Dominoes; an album collaborator with J.J. Cale and B.B. King; a live foil for Jimmy Page; a secret weapon for The Beatles—even before we look at his own score’s worth of albums. – AB

Air guitar moment: The immortal riff of Derek and the Dominoes’ “Layla”. 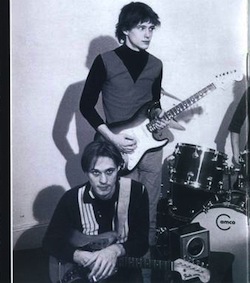 Another one of New York’s dynamic duos, Verlaine and Lloyd interwove melodic crunch like cogs in an industrious machine. If one were to play without the other, the complexity of a song like “See No Evil” would collapse under its own weight, as an unsound tower of Jenga blocks might disastrously tumble to the ground. One of their lasting achievements is still their attention to off-kilter juxtaposition and alternating rhythms; an aesthetic that bands such as Blondie or The Ramones had jettisoned in favor of more straightforward power chord punch. The dynamic of their playing, matched by chime-like clarity and bluesy confrontation, cyclically swells and ebbs in a way that few guitarists have been able to match since. But, then again, how could they? – JM 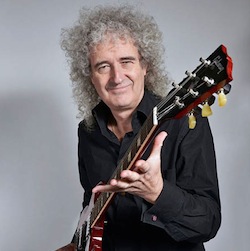 If you are in a band with Freddie Mercury chances are you won’t get your fair share of the spotlight. This is why May, who pound for pound holds his own against or even surpasses the likes of Page, Iommi and Gilmour, is shamefully underrated as a guitarist. He holds a masterful guitar tone that is recognizable on the first note. Not only can he shred, but does so against the wide range of stylistic shifts his band took. Queen layered their songs with lush vocal harmonies and piano parts. May was skilled at not crowding, yet could fill an arena with a single note. Most guitarists who don’t have the chops to play an arpeggio are quick to call guitar solos a masturbatory excess, but May was the shining example of having the skill and knowing when to temper it with taste. He could burn a fretboard as well as any guitar legend, but served their songs first. – WL 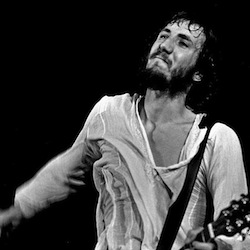 Rock and roll’s most ardent philosopher king has to play guitar, but contrary to expectations the Who’s fulcrum shied away from solos. In his earliest work Pete Townshend used power chords as set charges to play the landmines youth culture were stumbling over. As his narrative ambitions extended so did the depth of those chords: They paired with the morass of Keith Moon’s drums and demanded to have their questions answered. When they weren’t, you could sense their deflation in Townshend’s sad, afterthought picking. It was a telling blend of blue-collar effort and complicated stabs at transcendence. As a result Townshend was able to say strictly through rhythm-playing what a million wordy lead players could not. – PP 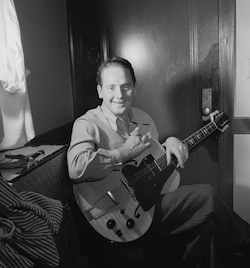 Audio recording and engineering, even that of today, still wear the stamp of Les Paul’s nearly countless innovations in the studio: Overdubbing, delay and echo, vari-speed recording and mastering were just some of the practices he impacted. Though he built prototypes of the Gibson guitar that still bears his name, it’s easy to forget the dude could also play. The line between Paul’s natural chops and tape-deck enhancements may blur —the rapid, high-pitched plucks on “Tico Tico,” for example, were recorded at half-speed—but Paul was upfront about his yen to invent and never sought to deceive. And no amount of control-room trickery could disguise Paul’s keen instincts for complex jazz harmonies, perfect note placement, and the level of sophistication he brought when his playing crossed over to country, vocal pop and early rock. – PP 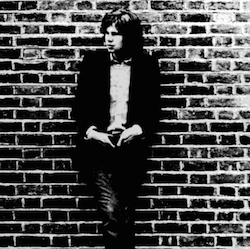 There are hardly any pictures of Nick Drake. Eyewitnesses report the gentle virtuoso to have stood around seven feet tall; a slumped spire of a man, picking at an intricately down-tuned six-string. The artist’s voluntary isolation and struggles with mental illness during his musical career cordoned him off from the world, resulting in underwhelming critical reception during his short lifetime. Drake’s reclusiveness is highly reflective of the tone of his melancholic folk and brooding melodies across his three studio albums. The consistencies of his isolation and depression are perhaps most concentrated on “Parasite,” off of 1972’s Pink Moon, but “Road” contains the quintessential acoustic movement found within Drake’s finest material. – PPilch