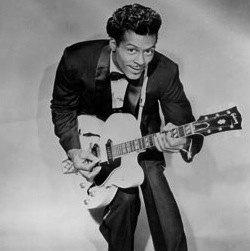 Even aliens know Chuck Berry’s importance. On the Voyager I and II spacecraft, Berry’s “Johnny B. Goode” is included on the golden records featuring sounds and music from Earth in the event the probes are discovered by intelligent life. It’s fitting; few other songs so succinctly and perfectly epitomize rock music. His relative lack of technical acumen compared to today’s guitar gunslingers is irrelevant, because their whole style wouldn’t exist without Berry, and while he didn’t invent the guitar solo (Muddy Waters or John Lee Hooker probably gets that distinction), the joyous picking in “Goode” before the first verse and in every chorus exemplifies what shredding is all about. – LG 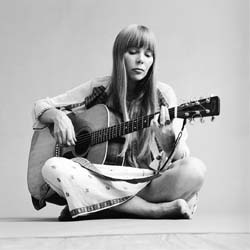 When Mitchell suffered a bout of polio in her childhood, the weakness that remained in her left hand could have deterred her from pursuing a career playing guitar. On the contrary, it inspired her to conjure innovative and unconventional methods of playing, turning what others may have perceived as a handicap into a uniquely original advantage. She improvised over 50 alternate tunings for her guitars, resulting in what we now think of as the familiar-but-strange Joni Mitchell sound. From the chromatic melodies of her 1960s harmonic work to the jazz fusion of albums such as Hejira, Joni found ways of surprising us and satisfying us in equal measures throughout her guitar-playing career. – MP 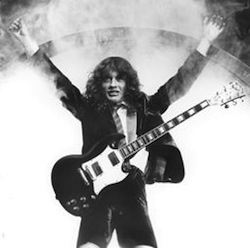 Precious little about AC/DC is complicated—Angus Young’s schoolboy blazer and tie pretty much wrap up their entire subtext strategy. But at several points in their 40 years they could lay claim to the title of the greatest working rock band in the world, and Angus is their still-burning core. His mastery of backbone riffs likens him to both metal and punk musicians, but his devotion to electric blues and ‘60s power players comes through in his unassuming, octane-generating solos. And he got better as AC/DC’s star ascended: The brute of ‘70s anthems such as “Jailbreak” and “TNT” might never have played the staggering opening notes of “Thunderstruck,” but in hindsight they’re very much cut from the same cloth. – PP 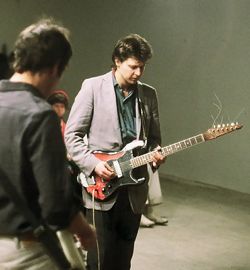 Claustrophobic. Nauseating. Panic-inducing. If these aren’t the first words that come to your mind when listening to Glenn Branca, then…you have a higher tolerance for cacophony than most people? Still, the beauty in Branca’s skill as a guitarist is that he can make such cacophonous noise so engaging. Mind you, nothing he writes is pleasurable, per se… but, then again, isn’t the whole concept of pleasure subjective? It’s hard to imagine him—or anyone—experiencing anything close to bliss in making music so single-minded, obsessive, grating… but listen to “Light Field” from The Ascension and how can you say this dude is not having an absolute blast? – BB 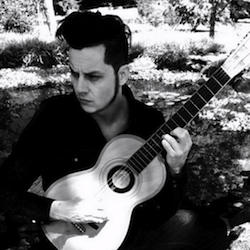 If there is one figure in 21st century music that embodies the classical guitar hero, then it must be Jack White. The eminent rock and blues historian of his generation, he has studied the greats, distilled them back down again, and assembled the bare bones of what it takes to build the primal, timeless guitar part. He can do riifs (“Seven Nation Army”), he can do solos (“Icky Thump”), he can do melody (“Many Shades of Black”). He can turn his hand to a Bond theme, a Beyonce single, a Loretta Lynn album, a Dusty Springfield cover, you name it. For as long as Jack White is playing in bands, the guitar hero is not dead. – MP 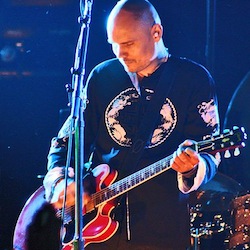 Sometimes, it’s not merely fretboard gymnastics that make one an unforgettable guitarist; it’s the sound they engineer or pioneer. Billy Corgan combined his love of Black Sabbath, Bauhaus and Pantera and developed a trash/grunge hybrid that masked his formidable virtuosity. You know it’s a Smashing Pumpkins song by the hollow, high-end overdrive. Corgan’s solos for “Cherub Rock,” “Geek U.S.A.” and “Soma” have appeared on Top 100 lists. He is at least partially responsible for the quiet/loud/quiet/loud progressions of the ‘90s, with an understanding that shifting dynamics means more than stomping on a box; it’s about creating and fostering a mood, something Corgan mastered unlike anyone else. – CG 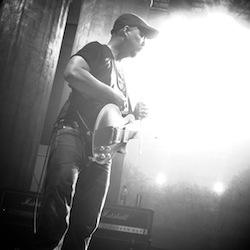 The thunderous performance on “Where Is My Mind?” is enough to solidify Santiago’s spot on any guitarist list. The rest of his talent on early Pixies albums, however, is worth noting: Come On Pilgrim (“I’ve Been Tired”) Doolittle (“Hey”) and Surfer Rosa (“Vamos”) are a testament to his abilities. In later records, he manages to elevate that piercing sound to a higher level, an element the band would later be known for. Shit, even the early Purple Tape album has some of his best featured guitar playing on early versions of future songs. Meshed in with Black Francis’ surreal screeches, Kim Deal’s thumping bass and Dave Lovering’s tight drums, the dynamic of the Pixies would be incomplete without the piercing sounds of Santiago’s guitar. – GM 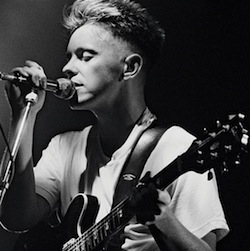 Admit it: When you think about music from the New Order/Joy Division spectrum, you make immediate associations with their danceability (whether it’s a morose gothic sway or a technicolor synth pattern) and their wide-open Peter Hook basslines. But something has to fill the spaces in between, and more often than not it’s a Bernard Sumner riff. He and his bandmates manage to transcend the ordinary with wailing melodies from the darkest emotional abyss and with bouncy, substance-enhanced grooves. Even a triggered sample will work, when the noise on the other end is a smart Sumner chord progression. – AB

Anyone who has attempted to play “Raining Blood” on Guitar Hero III on any difficulty above medium will understand why King and Hanneman have made the list. The duo of one of thrash metal’s “Big 4” bands crafted some of the genre’s biggest and most daunting rhythms through the ’80s and ’90s through their tremolo picking, erratic scales and perpetual flipping between lead and rhythm sections. Their sound was as disorienting as it was depraved. King and Hanneman’s work have been widely influential in death and black metal genres and many bands, who themselves, have become influential (like Mayhem, Darkthrone and Cannibal Corpse). Reign In Blood, the group’s greatest album, has been touted as the “heaviest record of all time” and an immediate classic. – CD 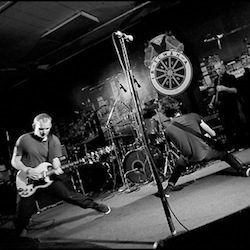 Ian Mackaye and Guy Picciotto have both excelled brilliantly as guitarists on their own, making especially notable marks via The Evens and Rites of Spring, respectively. (Before you take to the comments section, note that Mackaye never played guitar for Minor Threat—Thanks.) But when the two combined forces it was a gritty, loud and beautiful force. Case in point: The band’s earliest recordings only include Picciotto as a vocalist, and there’s a noteworthy improvement in tone and ferocity once the two began interplaying melodies and riffs with one another. Several albums of experimentation later and the duo would master a post-hardcore guitar sound that would-be-punkers have been chasing since. – ATB